After the dust had settled on the 2012 National Signing Day (NSD) for Mississippi State, there really was only way to describe the class State had hauled in:

For State, the day went as many thought it would, receiving LOI's from all (but one) committed players early in the morning, and reeling in prized uncommitted recruits Richie Brown and Beniquez Brown just before lunch.

Although many thought both Richie and Beniquez (no relation) were State "leans" coming into NSD, you never know what will happen until the pen meets the paper. State already had a solid class signed with Nick James, Denico Autry, Quay Evans and others, but signing the Browns was the icing on the cake.

The only commit that reversed his decision today was Port Gibson ATH Adairius Barnes, who signed with Louisiana Tech. You can't blame guys like Barnes, who will probably get a good look at playing time in Ruston, for switching. And as many programs can tell you first hand, only losing one recruit on NSD is considered minimal damage.

Here's a quick analysis of the class:

Big Catch Of The Day: With Quay Evans already enrolled in classes at State, big catch has to be signing of the Browns - Richie and Beniquez.

Heartflutter moment of the Day goes to Beniquez Brown who was like sike when he reached for the Auburn hat before quickly grabbing the State hat (note: sharp dressed guy as well)

Overall thoughts: Great class. Really solid top to bottom, no weaknesses at least on the surface. State filled a lot of needed positions and balance showed with 11-11 split in recruits signed offense to defense. I think if you HAD to point out a weakness it would be the lack of a solid QB, but give Dan & Co. credit they basically had 2 months to find a guy and commit him after Dylan Farve left. With Farve still in house you probably don't need a QB as bad, but then all of a sudden he's gone and you have to find a guy in a hurry. Nick Schuessler seems to have the potential for upside, so glad to have him. His coach, who coached David Green (former Georgia QB) comparing him to David certainly doesn't hurt thoughts on him.

- Offense: With Cox gone this year and Boyd the next, glad to see the addition of some quality d-linemen in this class. And by quality, I mean 4 and 5 star guys that will make an instant impact next year and the next. Have to think both the Browns will make fantastic LBs in the future as well.

- Defense: Some more solid athletes to churn into that dynamic offense. No real "name" palyers that jump out at you, but people tell me Xavier Grindle is a playmaker, and I wouldn't be surprised by big things out of Artimus Samuel. Plus his first name is pretty badass, ya know? Artimus. Just demands respect, really.

Really excited about this class, and think they'll fill some holes down the line. Guys like Autry and Evans (early signees) will make instant impacts, and Richie Brown probably could too. Sky's the limit really for this whole class. Whether they were 4* or 1*, Coach Mullen and Co. have proven the ability to get the absolute best out of each recruit in their time on campus. Ask Jonthnan Banks.

Enjoyed NSD this year, hoping for another great one a year from now, but now, back to your regularly scheduled posts about not-recruiting.

Here's some Quotes, Links, Pics and Videos to help finish wrapping up the day that was State NSD 2012.

We've had a tough week of workouts with our guys on the team now and these guys got to know guys on our team, or already knew them. They know how hard we work, the standards we set, and the expectation to graduate and they've all embraced that concept and decided to come join this football program.

I think everybody knows my feelings on that and we will evaluate this recruiting class three years from now and see where we are. But if you look back at my first recruiting class right now you might give Banks a couple more stars or points, or however everybody rates them. He probably wasn't a must have ranked player, but he turned out to be pretty good. I don't even think Fletcher Cox was the best player in the state but he turned out to be pretty good. So, you know, we evaluate these guys as their careers continue to move on. I think we are very fortunate to have people tell me we are ranked in the top 20 recruiting class by different websites they have but as coaches now it is our jobs, it is our obligation, we've been given this piece of marble and now we have to go carve a masterpiece out of it with these young men.

On Bulldog Signee Will Redmond

One of the things you want to see when you turn on the high school film or go watch them play, it shouldn't take you real long to ask ‘who are you there to see?' and Will is one of those players that will jump off immediately whether it's running back, safety, cornerback everywhere on the field. He has the physicality to play safety, the athletic ability to play cornerback and the skill set to move over to the offensive side of the ball. He's then a guy I know their coach trusts to lead their lead and their coach wants to put the ball in their hand with the game on the line even though he's a defensive player. Those are the players I want to have in the program because those are winners.

On recruitment of Nick Schuessler

What happened is, there were a lot of issues. One was the question of whether we were going to take a quarterback this year. We would've had potentially three guys coming back with no seniors in next year's class. It was a question, do we want to have - you can get yourself in trouble that way. That's the golden rule: You take a quarterback in every signing class. But we had a lot of discussion. We had a little bit of turnover at the quarterback position in December, and it kind of really refocused us. We had offered a quarterback, and one of the things, and Nick understood, we said, hey, we had offered a guy. We were going to give him until a certain time to let us know to make a decision. We actually allowed him to extend his time a little bit longer, and as soon as we knew about the decision, we said, hey - and the great thing with Nick is he understood that. He understood that honesty and appreciated it, that we didn't feel right if we offered him and he committed, and then somebody else wanted to come, and I said, ‘You no longer have your scholarship. Even though I promised you one thing, I'm going back on my promise.' But he was always the top guy sitting right there on the board for us at quarterback - well, I guess the second guy, because we had another guy that we thought we had an opportunity at as well. It's always tough, because they're right there, the guys that we evaluated, and very different players that you look at in that situation. I always told Nick, I always err to the in-state guys first as a loyalty to the kids from Mississippi, and that's why we went and gave one guy the first opportunity, and then we jumped all over Nick. It was actually funny, during that whole weekend when we were sitting there with Nick, I kind of came to the conclusion, I thought Nick was the better quarterback. Then it kind of came real heavy that he was the much better quarterback. In our minds and the time we spent with him, it became tough. I think he's just a great kid and a great family, and really understood everything that went on during recruiting. The fact we were up front with him right from Day 1, I think allowed that great open communication with us.

*all quotes from Marcello's transcript here

Beniquez Brown dons the Maroon and White (photo via Times-Daily) 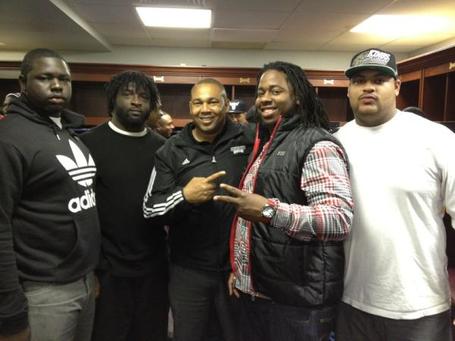 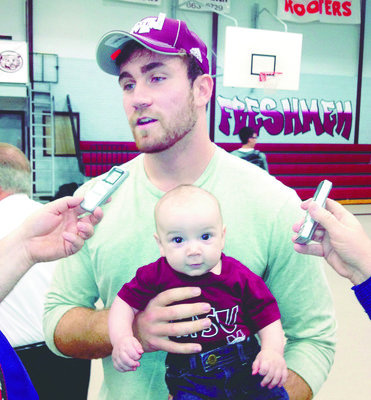 and of course, the famous Richie Brown photo (w/ nephew in hand)