I really don't know what people did without the internet.

Thanks to nifty sites like cfbstats.com, we here at the site are able to bring you random, pointless yet neat and informative statistical analysis about Mississippi State sports.

My latest trip to the cfbstats realm found me looking at State's offensive production statistics for the 2011 season. State finished the season ranked 5th in the SEC with 357.2 YPG of total offense. Sure 5th doesn't sound that great, but when you consider who the 4 teams were that finished in front of us (Arkansas, Alabama, Georgia, South Carolina in that order),then you don't feel so bad about 5th place at all.

But what ended up catching my eye wasn't the 2011 finish, it was when I started looking at our finishes in total offense per game since 2007. Now look: I know none of this is breaking news to anyone. It goes without saying that Coach Dan Mullen has vastly improved the offensive game of MSU football since the days of Sir Sly Croom. But it is still neat to go to the total offense page here, click on the year 2007 and slowly make your way back to 2011. State went from 12th to 10th to 7th to 5th in both 2010 and 2011. No regression, only improvement each year. Although State didn't see as much of that improvement translate in last year's overall record, it's comforting to know that in the toughest conference in the country, the maroon and white dogs are only getting better at offense. 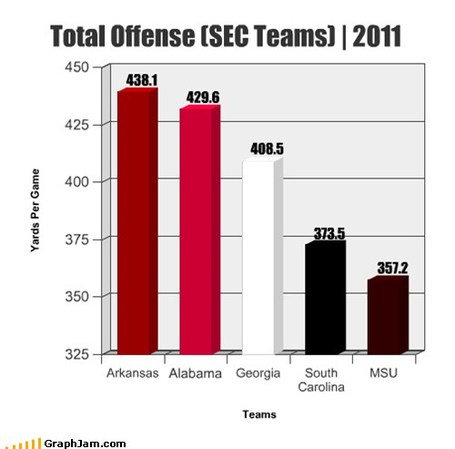