Share All sharing options for: My MSU Basketball "Game of the Century": MSU vs. Bama, '04

Yesterday as a part of their celebration of a century of basketball, Mississippi State released an All-Century team and a "Top 5 games" list from the past 100 years. The All-Century team included some of State's best, including bulldog legend Bailey Howell and one of my all-time favorites, Darryl Wilson. In addition to releasing the top players list, State also released a list of the top 5 games of the past century. It's important to note that this list was voted on by fans and was not simply the opinions of the Athletic Department. It's also important to then note that most fans using an internet-based voting system would not have been alive to witness any games prior to the 1960's, hence the omission of the great MSU-Laurel YMCA game of 1915.

Obviously for each individual fan this list varies in ranking and in the inclusion of additional games that didn't make the top 5 cut. But for me, the top game of the century has to be the legendary battle at Coleman Coliseum in the spring of 2004. 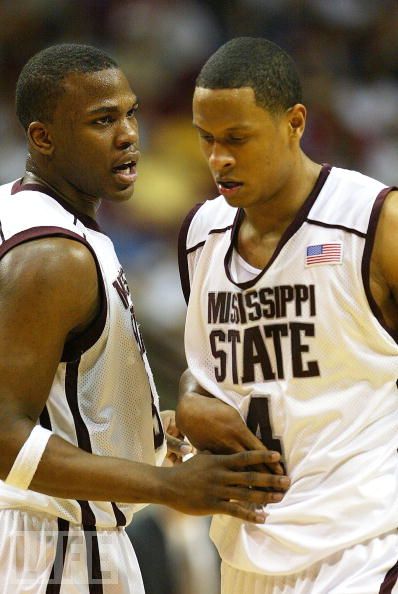 I was a senior in high school at that time, and my grandparents, who are die hard bulldog supporters, came upon some tickets for the game. My grandmother, being the sweetheart that she is, decided to give me her ticket so that I could attend the game with my grandfather. She made the journey to Tuscaloosa with us, but watched the game with a friend across town. What seemed at the time like a simple, fun Saturday in the life of a teenage bulldog fan turned out to be the cementing factor in what will be a lifelong love of maroon and white.

Little did I know before entering the coliseum just how good our seats would be that day. But there I sat just before tipoff, 6 rows behind State's bench and in awe of my situation. Surrounded by Crimson Tide enthusiasts though, my grandfather and I quickly deduced that our cheering situation would need to be kept to a minimum to reduce abrasiveness with the natives.

As you probably remember, the first half did not go as many of us would have hoped. State was down 18 at halftime, and my young mind had already shifted to the succulent post-game visit to Dreamland that awaited me. But throughout the entire first half, as Bama continued to knock down shot after shot and extend their lead further, I noticed that my grandfather's attitude of hope never wavered. He never seemed frustrated, never threw in the proverbial towel on what seemed a certain loss for us. And if you know my grandfather, you know this isn't the usual case. And as the second half got under way and Bama continued to maintain their distance from State, my grandfather's attitude of patience towards State's play continued.

Puzzled, I finally asked him what his thought process was, for I had long since given up on our chances of winning. "I just have this feeling," he said. "We're going to win this game, I know it's coming." With my instilled respect for elders kicking in, I didn't question him, but I did wonder where his hope was coming from.

Then it began to happen.

A Brandon Vincent-led 1-3-1 half-court trap quickly worked State back into the game. Bama was frustrated, rarely getting the ball past the big man. This defense led to quick points for State and before I knew it the lead for Bama dwindled from 18 to under 10. All the while I would look at my grandfather and he gave me that look while simply saying "I told you. Keep watching."

Before I knew it State was in a tight see-saw game with under 2 minutes to play. I had gone from barely paying attention to completely enthralled with each dribble. I don't think my words can adequately describe what transpired in the final minutes, so here's the video:

What a feeling. As I stood in shock at what I had just witnessed, the screams of thousands of maroon and white patrons in the rafters of Coleman Coliseum echoed through the back of my skull like a banging drum. I loved it. My grandfather and I were a level of excitement above what I would describe as "thrilled," high-fiving any and every State fan we saw near us. They were easier to see now, as most of the Bama faithful had quickly headed for the exits. We yelled until we could barely speak anymore. "Maroon...White" cheers went on forever it seemed and we celebrated like we had just won the national championship.

And in our minds, we might as well have just won the national championship, because we had just won the SEC. And it wasn't just that we had won the SEC, it was how we had done it. In a league often dominated by Kentucky's and Tennessee's, we arose from an 18 point hole in a hostile environment on the road to be the kings of the mountain in our conference. In my mind guys like Timmy Bowers and Brandon Vincent were gods, with their deity status only being furthered by this unimaginable feat accomplished that day.

Above it all, it was the perseverance of the collective State fan that day that stood out to me. Some may have left sure, but many stayed through the drumming we received early in that game to watch us rise up and claim victory at the end. Being a part of that day was a feeling I can't even describe to you in words. It was amazing. And although being a State fan often has its hardships, days like that spring day in Tuscaloosa are what make it worth it all.