That sound you heard last night? The collective sigh of relief from thousands of our fellow Mississippi State fans, as the losing streak is finally over.

State didn't play its best game last night, but when it counted the Dogs stepped up to the plate and finished off South Carolina 69-67 in a thrilling OT game in Columbia. With 1.4 seconds left State was set to inbounds the ball, most likely looking to go to Arnett Moultrie. But Moultrie was double covered, so Dee Bost found a wide open Brian Bryant just outside the lane, and Brian didn't disappoint. The Gamecocks were stunned, and really most us State fans probably were too as those types of endings don't typically go our way. But give credit to this basketball team last night: they had a chance to fold to a sub-par opponent on the road but they didn't in the end.

South Carolina had a similar chance to end things at the end of regulation, but a Bruce Ellington floater wouldn't go, and the game headed into overtime. Much like regulation, overtime was a back and forth affair right up to the end when Bryant stuck the dagger in the Gamecocks heart.

State was led in scoring by the night's hero Brian Bryant with 16 points, while fellow starters Moultrie, Bost and Sidney chipped in 15, 13 and 12 points a piece, respectively. Last night also saw Rodney Hood return to action after last week's bone bruise injury against Kentucky, and Rodney was able to chip in 5 points in a limited 13 minutes.

Here's the video from last night's big win (FF to about 4:17 or so to watch the Bryant layup to win):

Even though it was a too-close-for-comfort game throughout against a 2-13 SEC opponent, a win is a win in my book, especially after the last several weeks we've seen. I have to give a ton of credit both to the players and to Stansbury for finding a way to simply get a win and break the streak. I haven't always been the biggest Brian Bryant fan as he sometimes makes me nervous with the ball in his hands, but Bryant has strung together a solid set of performances the last few games out. Therefore Brian, this meme is for you: 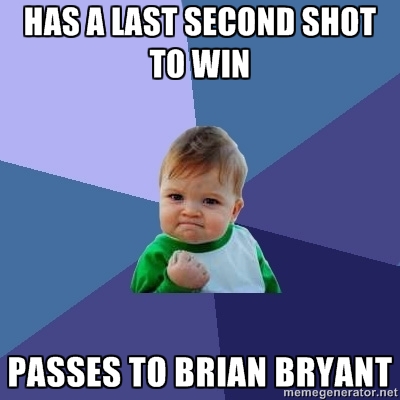 State will wrap up its regular season Saturday on Senior Day with a matchup against Arkansas. Tip off is set for 4pm at the Hump. #HailState