Recapping My Weekend in Baton Rouge

Share All sharing options for: Recapping My Weekend in Baton Rouge

In my 26 years of being a fan of Mississippi State baseball, I had never once had the opportunity to travel to watch the Bulldogs play an SEC road series. But several weeks back my best buddy and I decided we would venture to Baton Rouge this year to watch State take on LSU. I mean, what the hell, why not? You only live once, and we may never have a better opportunity to go than we did this year. So we booked our room and began looking for tickets. Unbeknownst to me at the time was that my amazing and gracious boss had Champions Club tickets. And, one day when I was in his office discussing work, my boss, a man with so much on his plate but yet doesn't forget a single thing, suddenly remembered I graduated from Mississippi State and offered me his tickets to the games against MSU.

After thanking him maybe 14 times and returning to my desk I quickly googled where our seats where located. I then called my buddy and began gushing like a school girl and possibly jumping up and down in place flailing my arms at just how fortunate our trip had become. So all that's left was to go, and this past Friday go we did to the place many enter but few leave with football or baseball related victories. 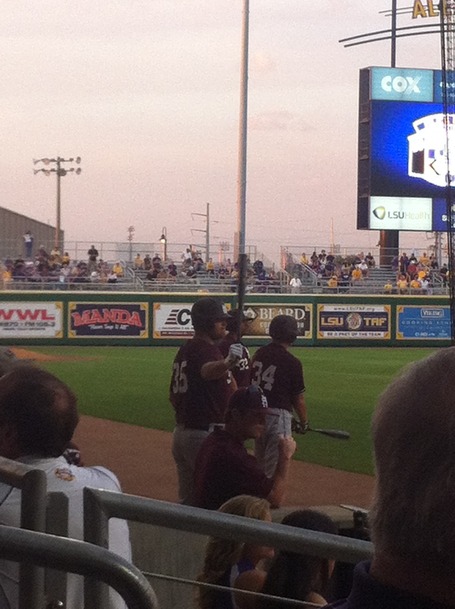 We made our way into the park and marveled at just how nice this place was. I mean you can look at the pictures, but until you visit the new Alex Box you won't understand just how fantastic of a baseball venue it is. We made our way down to our 4th row seats behind home plate, smartly dressed in the most neutral of clothing as to not offend the high society locals. We sat went early to the game Friday night and a minute wasn't wasted, as we took in every inch of the stadium and all of its sights, sounds and features. As the game began I was hopeful but not overly optomistic at State's chances to win on the weekend, as the team has seen more than it's fare share of injury struggles lately.

After a rocky first inning, State pitcher Chris Stratton began to settle down and settle in and we slowly but surely realized that we were seeing him come into his zone. 5K's, 10K's and then 15K's came quickly and with each pitch and each hitter Chris Stratton seemed more and more in demand of every pitch and every batter he faced. And after the pressure was put on me by Marcello to be you guys' score update man, the more flustered my tweets became (I tried to give you the best updates I could, if I failed you then I'm sorry).

If you're a baseball fan like me, watching Friday night's pitcher's duel was truly an enjoyable experience to the highest degree. On the other side from Strat, Kevin Gausman was twirling himself a pretty good outing as well, almost matching Chris strikeout for strikeout and ending the game with 11 K's of his own.

But despite Stratton's best effort, and it was his best and one of the best I've ever seen, State still couldn't get over the hump offensively to overcome the lead. Like I mentioned before, Gausman was on his game as well, but more importantly the dogs had entered SEC play without CT Bradford or Darryl Norris, and that showed several times during the weekend. Unable to conjure up any offense against Gasman (as they call him), I was sure that State would lose this battle 1-0.

With one runner on in the top of the 10th, MSU catcher Mitch Slauter laced one to left. It kept sailing and kept sailing and kept sailing, and the next thing I knew it was over the wall. Wow! My buddy and I, whom had been quiet for obvious reasons throughout the game, now pumped our fists in the air, celebrating what would surely be a Bulldog victory. When the bottom of the 10th came and we trotted Senior Closer/Ace Caleb Reed out to the mound, I thought surely this thing is wrapped up.

What I was forgetting, though, is that anything can happen in baseball and we were playing in Alex Box, where the juju is always on the side of the Tigers. After a series of events that are neither important to discuss at this time nor will they ever be worth repeating, we sat staring blankly amidst jubilant Tiger fans as their team had come back to win 3-2. We had instantaneously gone from the happiest fans in the stands to the most disappointed. Not disappointed in the players, just disappointed that we were so close to what would've been a huge victory for State to start the weekend series.

And disappointed for Chris Stratton. The young man who had without a doubt pitched the game of his LIFE and one of the best in Bulldog history would walk away with a no decision. 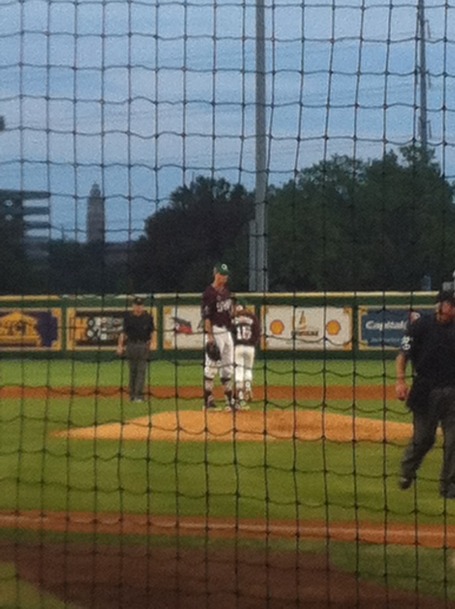 Saturday's game had a different feel to it. After the emotionally charged pitcher's duel Friday night, Saturday's game was more laid back, and really had a more "chill bro" type feel around it.

Also Saturday, the Bulldogs were sporting their throwback uniforms that we posted about several weeks ago. With those throwbacks, the Dogs were wearing green hats, in honor of St. Patricks Day. The picture to the right was the best picture of the night (I never claimed to be a Blake McCollum type talent), but the picture doesn't do the jersey's justice. They were awesome.

Again like Friday, State was unable to produce much offense, only scoring 1 run up until the 8th inning. Finally realizing the bad luck charm that I was, my buddy and I exited the stadium for the team's sake (and because of the disgust in us watching another called 3rd strike, and to also beat traffic).

We arrived at the truck just in time to catch the fact that State had loaded the bases and had 1 run home. Great, I thought, we missed the only excitement of the whole game. We listened though as Trey Porter lost his duel with the Tiger's closer and the Bulldogs lost again, heading into the final game Sunday with the sweep brooms squarely at their back.

Due to traveling, we were unable to attend Sunday's game. Of course State then won, and of course Rick Santorum called me and was like "hey bro, why aren't you up here at the park?" Okay, that last part may have not happened.

Overall, I took away from the weekend that this team is full of fighters. Simply put: State will be unsuccessful on the whole until they are able to get CT and Darryl back in the lineup. I have to tip my hat to young guys like Phillip Casey and Tyler Fullerton, they battled and held their own in a series at the most intimidating park in college baseball against one of the nation's top 10 teams.

Although I did not get to witness Graveman's outstanding performance Sunday, I did take away from the weekend that State's staff features 3 of the best I've seen in awhile. If they can get Bracewell back and healthy into that lineup as well, then they should hold their own throughout the rest of the grueling SEC schedule.

I also took away this: if you ever have a chance to visit the new Alex Box Stadium: do it. It is a facility to be admired and possibly copied (STARES AT SCOTT STRICKLIN) 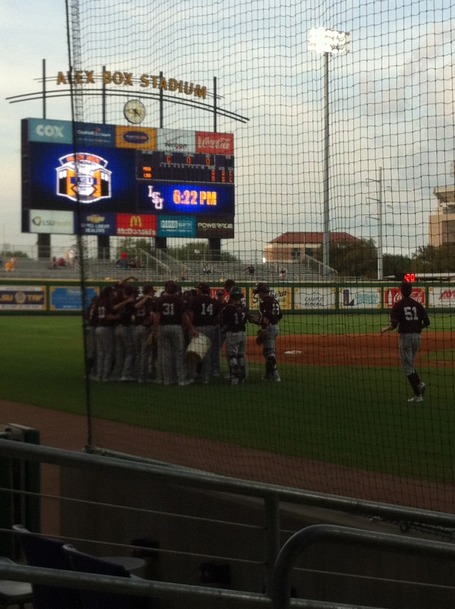