Share All sharing options for: Fletcher Cox Arrives in NYC 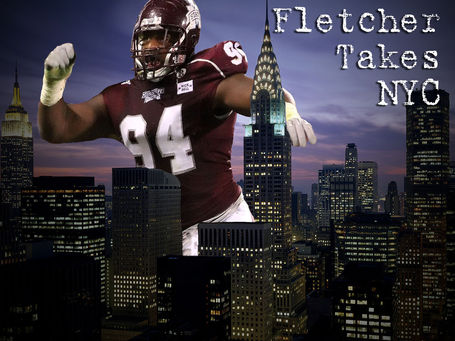 When I close my eyes, this is how I imagine Fletcher Cox's arrival into New York City.

New Yorkers haven't seen anything this big or powerful since the Stay Puft Marshmallow Man terrorized Manhattan (No offense, Babe Ruth). Cox is a 6'4, 298 lbs defensive lineman who runs a 4.79 forty-yard dash and can bench press 225 lbs 30 times. However, Cox isn't in town as the physical body of Gozer, come to destroy the world. You see, Fletcher Cox is on another mission: to be the first Bulldog drafted in the top 10 picks of the NFL Draft since Michael Haddix (8th in 1983). He's in town to be wined and dined, shoot promos for ESPN and NFL Network, and be shown off as one of the NFL's brand new stars. The NFL only invited 26 players to attend the draft at Radio City Music Hall, and Cox is projected to hear his name called as early as 6th overall on Thursday night.

Until then, what's a guy to do as the NFL's guest in The Big Apple?

Fletcher arrived on Monday and quickly caught up with fellow projected first-rounder Justin Blackmon, the All-American wide receiver from Oklahoma State, to pick out some new threads courtesy of Sean John.

UPDATES: Tuesday night Fletcher put some of those new clothes to the test as he hit the town.

Bout to step out in the cityyfrog.com/ob5ngnoj

We've heard talk of Fletcher bringing a cowbell to Radio City Music Hall, and I it looks like Coach Mullen is the caretaker.

Fletcher's family is set to arrive. Big day for him tomorrow.

The fam on the way to NYC I'm geeked

Fletcher sits down with SIRIUSXM NFL Radio for a pre-draft interview.

Common theme for Fletcher while in NYC? Looking good.

I've always wanted bottle service while playing video games. I guess you just have to be a 1st round draft pick.

At the Halo 4 preview party sponsored by XBOX!! YOU GOTTA GET THIS GAME! yfrog.com/h8h7zyfj

Quite possibly the biggest achievement of the week. Full-on celebrity status now!

Oh by the way my twitter is finally verified 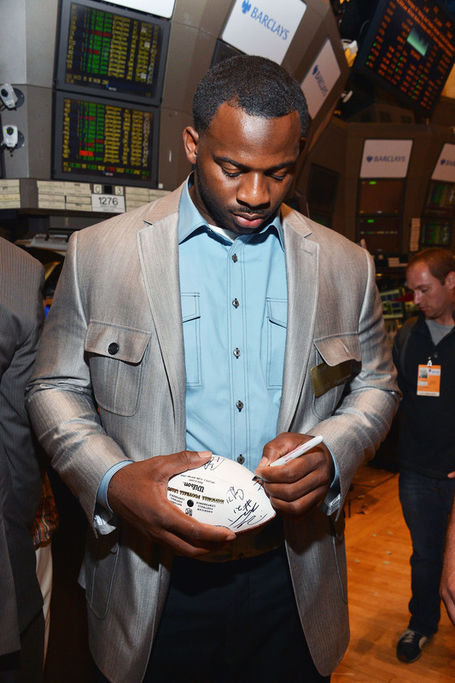 Check back for updates as Fletcher makes moves from the city to the podium!