For Whom the Links Toll | Fletcher Cox NFL Draft Edition

Share All sharing options for: For Whom the Links Toll | Fletcher Cox NFL Draft Edition

Last night the Philadelphia Eagles selected our own Fletcher Cox with the 12th overall pick. Here's some reaction from Philadelphia sportswriters, fans, and more. Also, bonus pic of Fletcher and Jamar included inside!

Fletcher Cox Is Excited To Be An Eagle | Bleeding Green Nation

Here's a picture of Fletcher and his family on stage at Radio City Music Hall. Sixpack says that's his brother on the left. The top hat is just awesome. 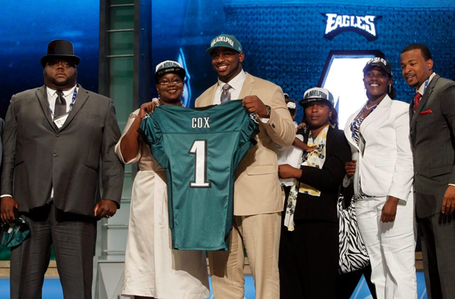 Oh, and Fletcher got to hang out with old MSU teammate Jamar Chaney this afternoon:

For more on Fletcher and his new team the Philadelphia Eagles, check out Bleeding Green Nation.