/Gregg Ellis heads to the podium

Gregg: Hello everyone and welcome to the announcement of the 19th head basketball coach in Mississippi State history. We're gonna do things a bit different today since Coach Ross isn't the most talkative gentlemen in the world. What we'll do is we'll have coach come out here, you can snap your pictures and such, and then we'll go straight into the question and answer session with the media. We're going to hold that session to about 3-4 questions as Coach Ross has a music video to shoot in Miami later today. It is now my pleasure to introduce to you the 19th head coach in Mississippi State men's basketball history...., Teflon Don himself, MR. RICK ROSS!!!!!

/this song starts playing over the PA system

/enter Coach Ross, along with several other unidentified individuals, or "posse" 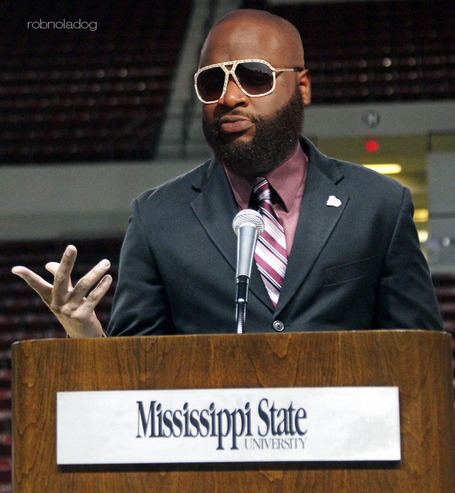 Bob: Coach Ross, we're all so very excited to have you here. Can you clarify something real quick for me: what do you prefer to be called? Rick, Coach Rick, Coach Ross?

Bob: okay then, RAWWSSS it is.

/Coach Ross points at Matt Stevens to call next question

Matt: Coach, welcome to Starkville. There are many questions about what type of offense you will bring in. Can you give us a hint as to what your style is, or what you forsee your players doing in the offense you're bringing?

Matt:.... So, the players will "cross" in your offense. Got it coach thanks for that excellence insight. One more question before I let the next guy ask a question: what would you say was the best indicator for you to come here north from Miami?

Matt: Okay I see coach, thanks for that explanation. You make an excellent point as moss does grow on the North side of trees.

/Ross points at Andy Staples, who for some reason is here covering the press conference

Andy: Coach, I have to be the one to ask you the food question. Now obviously Starkville is known to have some pretty good BBQ between Petty's and Little Dooey's, but I have to ask an experienced eater such as yourself: do you prefer the traditional Memphis dry rub technique or do you prefer a wet rib?

Andy: Have to disagree with you coach, I'm more of a dry rib man myself versus that with sauce. I also find that the sauce makes it stick between my teeth more too. How do you combat that?

/one of the unidentified gentlemen whispers in coach Ross' ear, Ross turns to the crowd, randomly yells NOREAGA!, then rings cowbell, then turns and exits. 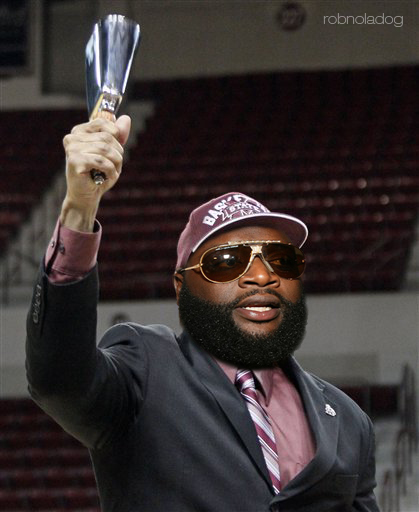 /everyone looks at each other, confused