From Golden Wave to Golden Arm

Share All sharing options for: From Golden Wave to Golden Arm 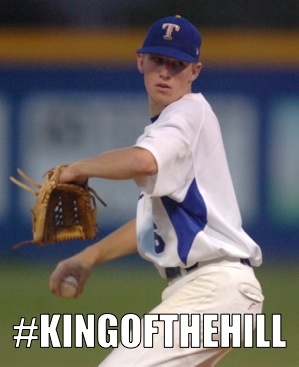 This phrase comes to mind when I think about MSU's absolutely phenomenal pitcher and former Tupelo Golden Wave standout, Chris Stratton. Why? For years, that's the nickname opposing high school teams would call him. How appropriate since he's the man behind nine (SHOULD BE TEN) Bulldog wins thus far this season.

Living and growing up around Tupelo, there's not a week that goes by that someone doesn't ask me about Chris and his recent success. Let me put it out there plain and simple: The kid is absolutely adored by all in this area. His father, mother, older brother, and younger sister are all great people who are loved and respected by so many in the Lee County area. Chris' dad, Lee, is a legendary former basketball coach at Tupelo High. He admired the game and loved teaching mathematics in the classroom from the mid 1980s until the early 2000s. His mother is a certified nurse for Tupelo Public School District. He and his brother are not only great baseball players but just as good hoopers on the court. And his younger sister is a University of Alabama soccer commit and current tennis standout. Needless to say, his family is very involved.

Chris was a force to be reckoned with on the high school diamond. I vividly remember folks who faced him high-fiving teammates when they returned to the dugout because they fouled off a pitch of his. Of course, they struck out but knowing they somewhat hit the ball was a major accomplishment for them. I've never seen that before... EVER.

"He had a great work ethic and the ability to make adjustments from high school to the college level which made him a very special player," says Tupelo High baseball coach Gary Enis. "Chris always played with a team-first concept and always put himself second to everyone else."

What's the most amazing thing I have seen from Chris over the last 15 years? Probably how respected he is in Tupelo by the diehard Ole Miss fans. I read tons of tweets two weeks ago after the Friday night game he pitched against Ole Miss in Starkville that said, "It's hard for me to be upset about that Ole Miss loss." and "the best pitcher won tonight." That says volumes about the respect the kid has gotten from one of the strongest Ole Miss fan bases outside of Lafayette County.

Chris faces a huge decision in his future: stay for a Senior MSU campaign... or go with a top 15-30 overall pick in the MLB Draft. What do I think he'll do? I won't decide just yet. But one thing I do know is this: the respectful yet humble kid that grew up in Tupelo has a bright, athletic future ahead of him.