Welcome friends to the first ever MSU Greatest Games Sweet 16 Bracket! What is this madness, you ask?

Well, we here at FWTCT have assembled what we consider to be the greatest 16 games in our school's athletics history. Now, did we probably leave off some classic contests out of this list? Absolutely, and we fully expect you all to let us know about them in the comments section. But seriously, if we left one off that you think should have been added, let us know! These types of posts are always great for debate and discussion.

So how does this bracket work, you ask? It's simple, really. Below is the bracket of the greatest games. Each day we'll post a matchup in the bracket, and you - the fan - will vote to decide which game moves on to the next round! 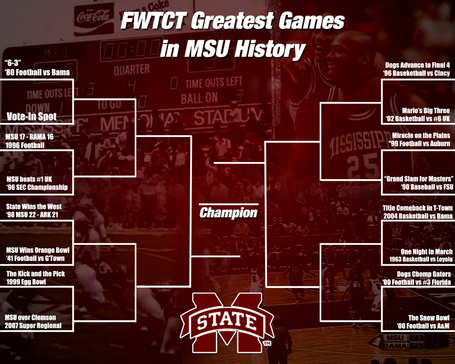 As you'll see, there is a spot for a "Vote-In Game Winner." That's right folks, we couldn't decide on just 16 games to include in our bracket, so we included an extra 7 for your entertainment pleasure.

The bracket officially starts tomorrow in the battle of 1996 vs. Cincinnati (Basketball) vs. 2002 vs. Kentucky (Basketball).

Here are your contestants for the Play-In Game. Whichever game has to most votes will move on to face 1980 vs. Alabama (Football) on Thursday. Remember State fans, your votes decide who moves on. Make sure you vote before you leave the page!

In 2000, Mississippi State played host to an NCAA Regional that included Notre Dame. After defeating Notre Dame once, the Dogs lost the second game against the golden domers, and suddenly faced a do or die Sunday match to determine who would move on to the Super Regionals. In the bottom of the 9th in a 9-9 game, Senior Bulldog Ty Martin launched a solo shot to center field that just cleared the right field fence, giving the Bulldogs a dramatic regional win.

The 2005 baseball regular season was a so-so one for Mississippi State, as they limped into the SEC Tournament after losing 2 of 3 at home to LSU to end the regular season. But hope springs anew when the SEC Tournament rolls around each May, and in 2005 that hope culminated in the Bulldogs winning the 3 opening games of the tournament and gaining themselves a berth in the Sunday championship game against arch rival Ole Miss. With a chance to wrap up our 6th SEC Tournament title at stake, the Dogs didn't disappoint, as a red-hot Jeff Butts and pitcher Todd Doolittle powered MSU past Ole Miss 4-1 to secure the tournament victory.

The 2009 season was an up and down one for Rick Stansbury's Bulldogs, but as they often did under Stansbury, the team got hot at the right time, and reeled of 3 wins in a row in the SEC Tournament to earn a Sunday matchup with the University of Tennessee. Tennessee was the clear favorite to win that game, but the Volunteers didn't have Barry Stewart and Jarvis Varnado on their team, and that was a key factor in their loss. The duo, who had enjoyed outstanding tournaments so far didn't disappoint in the championship game either, leading the dogs to a 64-61 win and a SEC Tournament Championship.

This video pretty much sums it up.

The MSU defense forced six turnovers to upset #11 Auburn on the plains. And no play was bigger than Derricks 90-yard pick-six in the 2nd quarter to give MSU a 10-0 lead. MSU led 13-0 in the 4th quarter when Izell McGill picked off Dameyune Craig at the MSU 10. J.J. Johnson sealed the game with a 13-yard TD run a few minutes later.

If you look in the Alabama record books under the National Championships that the Tide claim, there you will see the year 1941 listed. There's only one problem with that: Alabama didn't really win the National Championship that year, Mississippi State did, because they beat the Tide. Part of that NC run for MSU was a game versus the Tide in which State came away victorious 14-0. Bama may keep claim of winning that National Championship, but Maroon and White fans will forever know the 1941 year as the year of the Bulldog, and this game was a part of that outstanding season. (Link to a quick article on the game via the Bryant Museum)

None of us probably remember this game, but in 1909 State hurler Willie Mitchell tossed the SEC (and MSU's) first perfect game, striking out 26 in a 1-0 victory over the rival LSU Tigers in Baton Rouge. ALSO, Willie mean mugged the camera pretty hard back then. Proof: 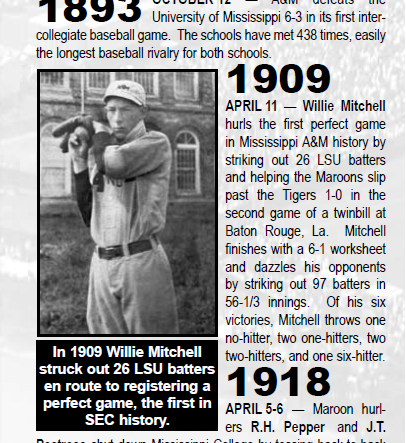 2002 was Rick Stansbury's breakthrough season. Two years earlier he landed McDonald's All-American Mario Austin in a recruiting battle against the University of Alabama. It was only fitting that Austin was named SEC Tournament MVP after unranked MSU defeated #8 Alabama 61-58 in the SEC Championship game. Austin scored 15, while Derrick Zimmerman and Michal Ignerski added 13 apiece for the Dogs. This was MSU's 2nd SEC tournament title ever (1996 over UK was the first).

2004 was certainly a forgettable year in Bulldog football history, but one particular October afternoon sticks in the minds of many Bulldog fans today. One individual, and one play, more particularly, that is. On October 23, 2004, Sylvester Croom's Mississippi State team rode the back of one Jerious Norwood to a stunning 38-31 victory over the #20 Florida Gators. Norwood had 174 yards on the afternoon and 2 TD's, but no single carry, maybe even in Jerious' career, was more famous than this one to seal the deal late in the contest:

That was the day Ron Zook learned what the term "Croomed" meant, as he was fired shortly thereafter that loss.

So, do you have a favorite game of those 8 above? Make sure you vote in the poll below before you leave the page. Remember: this is a fan contest, so if you want a game to win, you have to vote and spread the word to vote! We will leave the voting open for 2 days and then the winner will move into the "sweet 16" round to try and become the greatest MSU game ever.

Make sure you tune in tomorrow for the first-first round matchup: 1996 vs. Cincinnati (Basketball) vs. 2002 vs. Kentucky (Basketball).