6 Biggest 'What Ifs' in MSU History; #1: What if Cam Newton Had Come to State

Share All sharing options for: 6 Biggest 'What Ifs' in MSU History; #1: What if Cam Newton Had Come to State 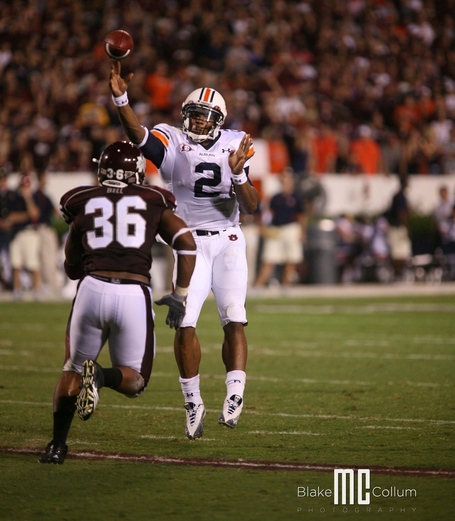 Could there big a bigger what if than this? Cam Newton - for all intents and purposes - was headed to Mississippi State until Auburn suddenly popped up on his radar and BAM - he heads for the plains.

We all know the story. Cam's father, Cecil Newton, wanted $180,000 for his son to play at Mississippi State. MSU would not pay, and so daddy made the decision for him - and from everything we know Cam Newton wanted to play for Dan Mullen in Starkville.

We're still unclear if the "money was too great" or if Cecil just didn't get the right price for his "rented mule"...but Auburn is off the hook and has a national championship to show for whatever they did or didn't do. Bottom line is...Cam Newton was an unbelievable talent, a runaway Heisman Trophy winner, who took an above average team and made them great.

But what if he had come to MSU like it seemed he would in December of '09? State was an above average team themselves in 2010. Would the Dawgs have been national champions? I think so.

Let's go game by game...
Memphis - easy win.
Auburn - obviously State wins since the Tigers don't have Newton and we do.
LSU - State threw 5 INTs and lost 29-7..it was an exhibition of how not to play quarterback. Considering how fragile LSU was at the time and how Newton wouldn't have done that, I think MSU wins this one even if it was in Baton Rouge.
Georgia - We won this one anyway.
Alcorn State, Houston - Easy wins.
Florida - It's not 10-7, it's 27-7.
UAB, Kentucky - no contest.
Alabama - State was obviously blown away in this game, 30-10. It's hard to say whether Cam Newton would have been able to overcome that considering the loss of Nick Bell prior to the game. But considering these two facts I think the Bulldogs would have won: 1. Newton withstood all the pressures of a pending investigation and allegations of cheating during the entire month of November and still played great. 2. He overcame a 24-0 deficit that year, in Tuscaloosa, in the most heated rivalry in all of sports.
Arkansas - This game went into double OT, I think with Newton it's safe to say State wins in regulation.
Ole Miss - haha, win.

BCS Title Game vs. Oregon - This was the one big game where Newton didn't dominate, and that's why they only won by a field goal. Nick Fairley was huge in that game - would State have been able to make those plays? Well, of course, I will say yes...Pernell McPhee, Fletcher Cox and Co. could have gotten it done.

The biggest argument anyone could make against this would be regarding Nick Fairley's impact on Auburn's run. That's undeniable, Fairley might very well have been the single best defensive player in the nation. But his supporting cast? MSU's defense gave up 5 points per game less than the Auburn D which had the services of Fairley. State's D also had Fletcher Cox, Pernell McPhee, K.J. Wright, Chris White and Charles Mitchell who were all drafted into the NFL (over the next two years; Banks, Broomfield and Boyd likely to make it 8 after 2013 draft).

Maybe the second best argument someone could make would be that Cam Newton wouldn't have flourished under Dan Mullen/Les Koenning/Mark Hudspeth as much as he did under Gus Malzahn. That's easy to debunk: Alex Smith and Tim Tebow...and Chris Leak too.

It's too bad MSU wasn't able to have the services of Cam Newton for one year - it could have been a great ride. Even if we would have gone from 5 wins to 14, and back to 5 again. What if. What if.