Aptly named, "The Kick and the Pick," the 1999 Battle for the Golden Egg proved to be one of the most exciting finishes in Mississippi State football history. When I think back to the '99 season, two things stick out: Great finishes and great defense. MSU started out the season 8-0 before losing close games at Alabama (19-7) and Arkansas (14-9). Despite losing two straight, State entered the game ranked #19 in the country and arch-rival Ole Miss was no slouch either with a 7-3 record and ranked #23. In a rare meeting with both teams ranked in the Top 25, Ole Miss rode Deuce McCallister (36 carries, 136 yds) to a 20-6 lead with 13 minutes left to play. MSU found some life when QB Wayne Madkin found TE Donald Lee for a 5-yard TD pass to cut the Ole Miss lead to 20-13 with 12:49 remaining. The rest, as they say...well, have a look.

I firmly believe that C.J. Sirmones is STILL wide-open at the 15 yard-line.

Madkin moved the chains by tossing the ball to WR Kelvin Love before finding Sirmones on a 38-yard TD pass to tie the game 20-20. That touchdown sent the Scott Field crowd into a state of wild disbelief. After being outplayed for 3 quarters, the Bulldogs had somehow rallied to tie the game. Most fans, coaches, and players thought Ole Miss would run out the remaining 27 seconds on the clock and send the game to overtime, but Ole Miss head coach David Cutcliffe had different plans. On Ole Miss' first play, Romaro Miller threw a deep pass that Robert Bean tipped and kicked to a waiting Eugue Clinton. Clinton took the interception and raced down to the Ole Miss' 27. The wild disbelief in the stadium was replaced by absolute pandemonium. Scott Westerfield drilled the ensuing 44-yard field goal to win it, 23-20.

"This game epitomizes our whole season. They were not going to quit. I kind of felt it when we started getting the ball back and moving it. You started feeling it on the sidelines. I knew that, if we got a chance to win, we would win it."

It's impossible for me to take Game 1 and 2 of the 2007 NCAA Baseball Super Regional in Starkville and separate them as different games. That weekend, those two games, was special all-around. There are few things more impressive than a packed-out Dudy-Noble Field, and June 8-9, 2007 was a perfect example of MSU baseball at its best. 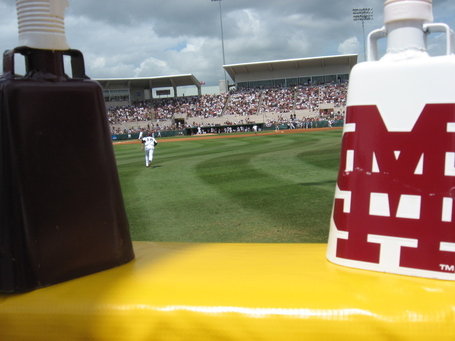 Mississippi State grabbed the super regional bid by upsetting #1 seed Florida State in Tallahassee a few days earlier as the #2 seed. Clemson was also a #2 seed and advanced to the super regional by taking down #1 seed Coastal Carolina in Myrtle Beach.

In front of a super regional record 12,620 fans on Friday (for an 11 a.m. game), MSU battled back on a couple of occasions and finally broke through in the 6th inning when Ed Easley drove in Joseph McCaskill, Moreland homered to center, and Brandon Turner doubled and later scored giving MSU a 6-5 lead. In the seventh, Moreland and Turner continued to swing it well with back-to-back doubles that gave State an 8-5 lead. John Lalor and Aaron Weatherford shut down the Clemson bats to close out the game (8-6 MSU win) and give MSU the edge in the best-of-three series.

I remember a few things: (1) I was still hungover from the Friday game. (2) It was HOT. (3) It felt much more crowded than Friday. No space to move in the right-field corner (4) I don't think some people have left the stadium since yesterday. (5) There is NO WAY we lose this game.

My speculation was correct. There were more fans in attendance. 13,175 to be exact (it felt like more). A new super regional record and the 4th largest in the stadium's history. Did I mention this was another 11 a.m. game? State scored four runs in the 2nd inning, highlighted by a two-RBI double from Jet Butler, to take a 5-2 lead. Clemson threatened in the 4th with two more runs, but a Russ Sneed double in the 5th and an RBI ground out by Diggs put MSU up 7-4. Clemson would add another run, but Aaron Weatherford would shutdown Clemson in the 8th and 9th before giving way to Mitch Moreland. Moreland got D'Alessio (Clemson's leading HR hitter) to fly out and struck out Harbin to win the series for State. Which led to a celebration for the ages...