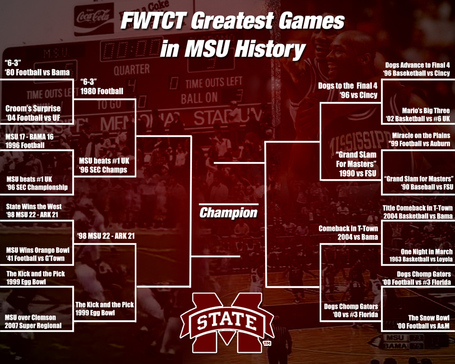 How They Got Here:

"The Kick and The Pick," took down the 2007 Super Regional vs Clemson (Baseball) in surprisingly easy fashion, 44 votes - 25 votes. The other match-up pitted the 1998 Arkansas game (Football) against an old-timer, the 1941 Orange Bowl vs Georgetown. Our grandparents rushed to the keyboard in their walkers as fast as they could, but couldn't quite find the strength to click the mouse after all that rushing...'98 Arkansas won 34 votes - 19 votes.

This is a classic match-up of great finishes from the heyday of The Kang himself, Jackie Wayne Sherrill. The '99 Egg Bowl is a personal favorite of mine. As a 15 year-old, I received my first whiskey shower. I'm not sure who launched the cup (and didn't understand it at the time), but THANKS! Some nights I dream of C.J. Sirmones lounging at the 15 yard-line, surrounded by naked goddesses feeding him Dooey-On-A-Stick. HE WAS THAT OPEN, FOLKS! MSU 23 - Ole Miss 20.

The '98 Arkansas game is another ridiculous finish. Freshman quarterback Wayne Madkin gets blitzed on what seems like every play in the final minutes and somehow keeps moving the chains. 3rd and 18? Avoids rush, almost sacked, almost sacked AGAIN, scrambles, ho-hum Kelvin Love FIRST DOWN. 4th and 15? FULL HOUSE BLITZ, steps up, runs out, oh hey there, Kevin Cooper. FIRST DOWN! Hazelwood would make his fifth field goal of the day and the Dogs won, 22-21.