Share All sharing options for: 100 Days of MSU Football - Day 93

1993 wasn't exactly a banner year for the Bulldogs. The record book reads: $4-5-2 (the team actually went 3-6-2, but Alabama's win was later forfeited by the NCAA to MSU), but if you dig deeper you'll find that a couple of historic marks were set by Mississippi State players that season.

Todd Jordan (MSU Quarterback) threw for 405 yards in a 38-24 loss to #5 Florida. That mark ranks as the 4th highest passing total by an individual in MSU history.

Later that season, running back Michael Davis would carry the ball 40 times (154 yards) in a 20-13 Egg Bowl victory over Ole Miss. Davis' 40 rushes set a record that still stands today: Most rushing attempts by an MSU player in a single game. 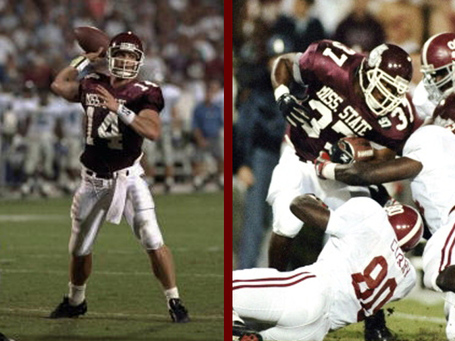