Share All sharing options for: FWtCT Q&A with Chris Stratton 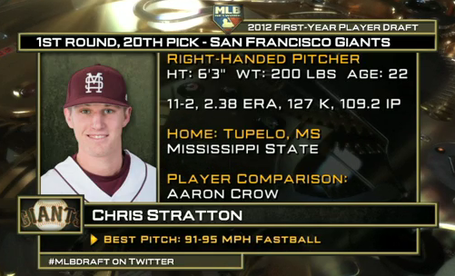 Junior Mississippi State RHP pitcher Chris Stratton was chosen 20th overall Monday by the San Francisco Giants. Here are a few of his personal thoughts of the last three years at Mississippi State.

Q: It must have been a wild week for you. Walk us through draft day. Where were you, how did you find out, what was it like?

A: Just sitting at my house in Tupelo with my family and it's kind of nerve-racking waiting on a call. But I was really relieved when I heard my name. It's really a blessing and a dream come true.

Q: Did you know the San Francisco Giants had you in their sights? And who else was talking or relaying messages to you?

A: To be honest, San Francisco had only talked to me probably one time before the draft and that was during the SEC tournament right after I pitched. I knew they had interest but not to that extent. I talked to pretty much every team. The Nationals were pretty high on me, the Padres really liked me, and Pirates, I thought they might would've gone 8th. I am just happy to be selected where I am. Like I said, it's just a blessing.

Q: Have you talked to the Giants anymore or have things unfolded with you and the idea of San Francisco since Monday?

A: Not really. I'm just taking it a day at a time. Recuperating from this season and getting ready for whatever is next. I'm just happy to be in the position I'm in.

Q: According to Brad Locke's Daily Journal article Tuesday, you have some connections in San Francisco, correct?

A: Yes sir. I have an aunt and uncle who live out there. Uncle Gaines actually owns a restaurant. So hopefully if I go out there I'll be able to stop by a few times and say "hello."

A: I felt like I was more mentally prepared. Not just the season but just also knowing what to throw. The year before I didn't have the pitches that I did this season. Just having new pitches and a new plan has helped me navigate through the season. Our pitching staff was so tightly knit. That dominance our team had pitching... I really did see it coming. Everybody helped one another and showed grips on pitches and just encouraged one another.

read the rest (lots of great stuff) after the jump

Q: Perhaps your most dominant performance was against LSU last season. Was that the best game you pitched at MSU, or does another one stand out for you?

A: That one was really good obviously and a lot of fun to do it at their stadium in from of their fans. It also showed them we were not there to play any games and we were here to make some noise. That was pretty important to me. If I had to pick one game it would be the Ole Miss game (2012) at home because we shut out our rival and they had gotten me last year. I needed to get them back for what they did to me last year. Doing that in front of our home crowd was really special.

Q: Any big differences in pitching at home and pitching on the road in the SEC?

A: Every week I would try to go against their pitcher. I guess just try to match him inning for inning. The goal of a pitcher was to put up zeros. I didn't really care how that happened. I didn't care if I struck out everybody or got ground balls. I just wanted to go out there and put up zeros. I liked to go up against LSU's Kevin Gausman and USC's Michael Roth who've already proved themselves. I felt like I needed to elevate my game to the next level and compete with them. To play on the road in the SEC is fun but we really do have some of the best fans in college baseball.

Q: You were tossed in the Friday night starting role this year. Did that surprise you? And did you often feel more pressure with the struggles the team sometimes had at the plate offensively?

A: Yes sir. We kind of struggled offensively this year. Our hitters knew if they got two or three on the board, we were going to hold the lead. I thought that was very important for our pitching staff. We knew if they get two runs we're holding this win down. I think that mentally helped us through the whole year. It helped keep our dominance up. It was just a ton of fun to play with all these guys. Not really nerve-racking since I was on relief Friday, Saturday, and Sunday last season. I had pretty much done it all. Going out there is just fun. That's what baseball is and that's what you have to make it.

Q: What was the biggest difference for you between your sophomore season and junior season?

A: Confidence. I didn't have much confidence in myself. I guess I didn't have confidence in my pitches or confidence to get the job done. If you don't have confidence, it really shows. Being on the mound is an elevated platform so the limelight is always on you. I just don't think I did what I was supposed to and coaches would get me out of there. I guess this past summer I needed to go find myself and make sure I was ready for the next season. And that's what I did with the best summer league in America, the Cape Code League. Knowing you can compete with those guys is a big confidence booster. The coaches let me do my own thing and told me to run my own show. At the end of the day, you might have 30 different coaches but you got to know what you can do and what you can't do.

Q: How much different is the draft process from the recruiting process?

A: People are pretty much looking at you in high school and people do in the draft but you don't get to pick who you go to on the major league level. The other is college coaches try to get you to feel at home. The draft is based more on talent and personality to see if you're a good fit for them. All in all, you just have to be yourself. That's what I did and I think that's why I've been successful and got to be at Mississippi State.

Q: Coming out of Tupelo High School, what other schools were on your trail? And how much time did you honestly consider towards them before deciding on Mississippi State?

A: Itawamba Community College and Meridian Community College were looking at me. Ole Miss and Mississippi State were also two I knew I'd pick from. They were both really high on me and it was when Coach Cohen and Coach Thompson had first got at Mississippi State so I didn't really know anything about them. I knew I felt really at home with State and I could just see it in their eyes that they wanted it to be a successful program and I really wanted to be a part of it.

Q1: Rumor has it that you were a great quarterback and shooting forward back in the day. Is this true?

A: Pretty true. I spent a lot of time in the gym with my dad, who's a former head basketball coach at Tupelo High, but if I had to lean one way or another I'd definitely say basketball.

Q2: Who's been your biggest role model or most positive influence in your life?

A: My dad, easily. Just the confidence he's given me and always backing me up 100 percent. I definitely couldn't do it without him and my family.

Q3: Which pitcher have you tried to model your approach after?

A: To be honest, I grew up watching basketball and didn't watch a lot of baseball. I guess if I had to say anybody I'd create it myself and do whatever came natural.

Q4: What's your favorite or best place to eat in Tupelo? And what do you get?

A: Connie's chicken, easily. Two open-faced chicken biscuits with a blueberry donut. And if I'm lucky I get to go back up there for another plate.

Q5: What's your favorite thing about Mississippi State and Starkville?

A: The tight knit community and the support everyone has for one another. I know Jamar Chaney and Fletcher Cox have both tweeted at me to just say "congrats." Fletcher and me are pretty good buds. I guess the fact that the Bulldog family just really sticks together. I'm just really blessed to be a part of that.

Q6: Former bulldogs who've recently been or about to be selected in their respected drafts have recently received a "Verified Account" checkmark beside their Twitter handles. We know you tweet some (@cstratton28). Have you thought about that becoming official for you in the near future?

A: Not really. I'm just glad I was a part of the Mississippi State family and I haven't thought about that at all to be honest with you.

Big thanks to Justin Sutton from The Daily Grind at @BulldogsRadio for helping out with the interview. You can listen to the full interview Monday on his show. Be a fan of Bulldog Sports Radio on Facebook or download the mobile app for iPhone or Android devices.