Share All sharing options for: Summer School - MSU History 101 | Bulldogs nearly to the Rose Bowl in 1940

Many of us that follow MSU football religiously are aware of our football success in the 1940's. Under Allyn McKeen, State dominated its competition, and McKeen amassed a 65-19-3 record in just 9 seasons leading the Maroons.

In 1940, Allyn's second year at the helm, Mississippi State had arguably its best season to date, finishing the year without a defeat, and with only a tie against Auburn marring their perfect record. After the 1940 regular season finished up with a 13-0 victory over the University of Alabama, the Orange Bowl came calling, and State humbly accepted, as they would go on to face (and defeat) Georgetown University in Miami on New Years Day, 1941.

Many people know about State's 13-7 victory over the Hoyas that day - it still stands as our most impressive bowl victory - but what I'm willing to bet most people don't know about that season was that the Orange Bowl wasn't the only potential postseason option for the Maroons. When digging through some old newspaper articles, it appears the Grandaddy of them all - yes the Rose Bowl - also was very interested in Mississippi State that after a 10-0-1 finish in 1940.

Yes it would appear in the 1940 season Mississippi State was the pretty girl that everyone wanted to dance with. Not only did State have an invitation from the Orange Bowl to play in their New Years Day game, but the Bulldogs also had a feeler from Pac-8 Champion Stanford to potentially take on the Cardinal (apparently the Indians back then?) on New Year's Day in Pasadena in the Rose Bowl.

As history tells us, the Bulldogs would accept the invitation from the Orange Bowl, and go on to face Georgetown University there in Miami. Oh, but how amazing it would have been to participate in the Rose Bowl! The Grandaddy of them all, as it is often known, the Rose Bowl is arguably college football's most storied bowl game throughout history. Although now it often hosts a game between the Pac-12 and B1G conference champions, back then the game was wide open to whomever they chose, and State was apparently pretty high on that list of choices in 1940.

State, however, accepted their Orange Bowl bid, and Stanford would go on to play Nebraska that year in the Rose Bowl, defeating the Huskers 21-13 and claiming a National Championship.

A small bit of interesting info on Stanford in 1940 - they were coming off a 1-7-1 season in 1939, and first year coach Clark Shaughnessy, much to the shagrin of those around him, installed the "T-Formation" offense at Stanford. Shaughnessy and company would ride that T offense to a perfect record and complete turnaround in 1940, capped by the Rose Bowl victory over the Cornhuskers.

This has been your weekly MSU history lesson, slacker fans. Next week we take a look at another fan-player interaction from the 80's related to MSU baseball. Can't wait. 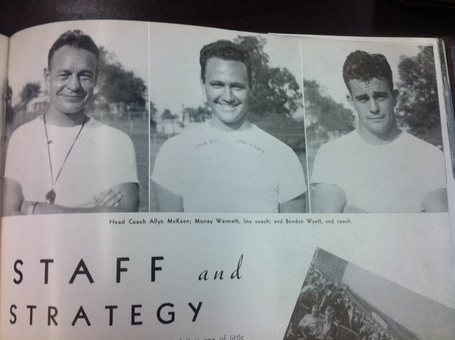 News clippings above via The Palm Beach Post - December 1, 1940 edition.