[clears throat] GENTLEMEN, I HOPE YOU ALL ENJOYED YOUR MANOLIDAY YESTERDAY, AKA, THE RELEASE OF EA SPORTS' NCAA FOOTBALL 2013.

I assume many of you were like me yesterday: anxiously awaiting work to end so we could run to Wal Mart, Best Buy or Game Stop to grab the latest installment of our annual EA Sports pigskin addiction. NCAA Football 2013 hit stores yesterday, and with it came our source of distraction until real football rolls around in September. Typically when I first get the game, I like to take it home, maybe play an exhibition game, and just get a feel for any new features the game may have. The next step is usually to head over to Dynasty Mode to see how many seasons it takes me to take Mississippi State to the National Championship game.

Just for your entertainment - okay, really more for mine - I got the game yesterday, came home, and simulated through MSU's 2012 season to see what simulated future our digital fate (AND OBVIOUSLY DIRECTLY CORRELATED REAL SEASON'S FATE) held.

In short, 2012 was a successful season for digital Dan Mullen and the Mississippi State Bulldogs. State finished with an impressive 10-3 record, with wins over Tennessee, LSU, Texas A&M, and Arkansas. The Bulldogs also made their second New Years Day Bowl in three years, taking on Nebraska in the Capital One Bowl in Orlando, Florida. Check out the rest after the jump for screenshots, stats and further breakdown of the simulated season.

As you can see above, one of the biggest results from the 2012 season was that Dan Mullen got the "has beaten no SEC West team outside of Ole Miss" monkey off his back. MSU defeated not only Texas A&M, but LSU and Arkansas as well, and nearly Alabama on the road to wind up finishing with a 10-3 season and a 3rd overall finish in the digital SEC West. The simulation on this game can do some crazy things, and the biggest thing that stuck out to me was the loss at home to Auburn. I mean, I think Auburn will be tough this year, but 38-7 in Starkville? Maybe the machine has a bit too much faith in Kiehl Frazier. Now obviously the LSU score is a bit shocking too, but in this sim'd season, LSU has a rough year, so maybe we just caught them at a good time (FINALLY). What else do you notice from the above results? Well for one, Tyler Russell had the year we all thought he would. Russell had big games when he should, and did just enough in the tougher games to help State pull out a few wins. Something else you probably noticed was Nick Griffin showing out. As you'll see further below, Griffin actually had a ridONKulous season, finishing with more yards than LaDarius did. Also, the biggest game performance to me was Corey Broomfield vs. LSU. Broomfield had 3 INTs, 1 99 yard INT return for a TD, and 3 pass deflections. Also, man the computer almost cost us our Egg Bowl streak, but I'm sure somewhere late in the 3rd quarter it realized we were playing Ole Miss and was like LOL no and then gave us the W. 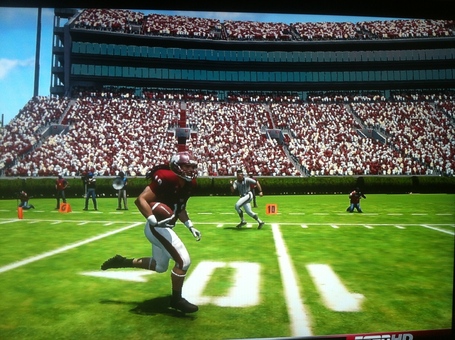 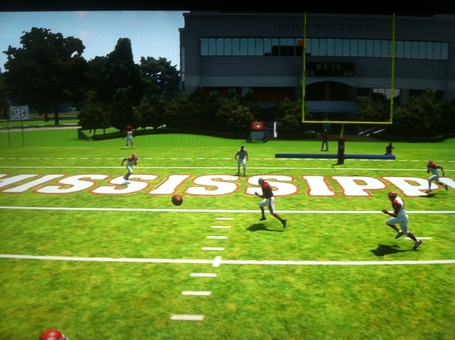 You know how this ends (and so does that Arkansas cornerback) 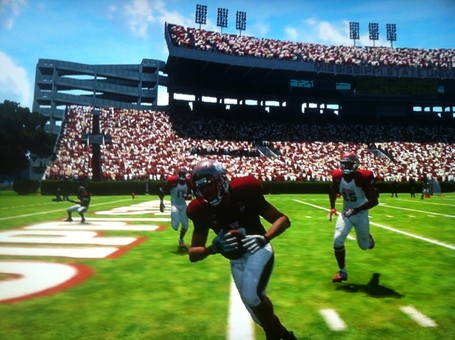 The first touchdown I scored myself when playing the game: a crossing pattern to Brandon Heavens. 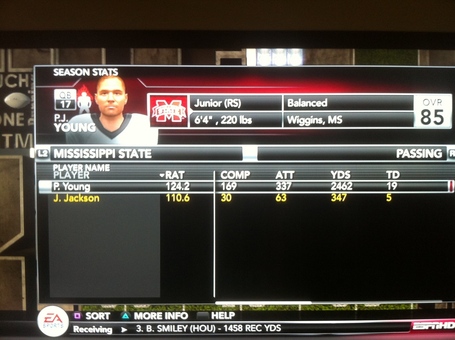 Obviously it was a good year in the passing department for State, as Tyler Russell (P. Young above) broke the school record for single season passing yards with 2,462. Russell also recorded 19 TD passes - the most in MSU school history as well. As you saw above as well, Tyler was the player of the game for quite a few Bulldog victories, including the big Arkansas win. Also, Russell is apparently from Wiggins, not the much rumored Meridian. We're learning new things, you guys! 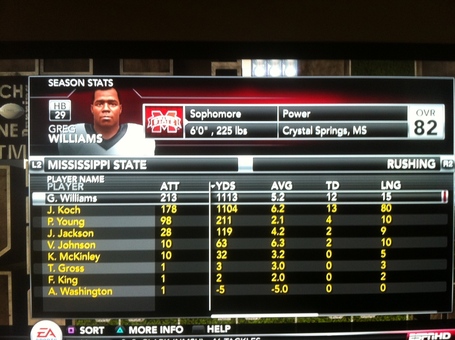 This one really, REALLY surprised me. Not that I don't think LaDarius Perkins and Nick Griffin are talented, just that I figured the running game, even in simulation land, would decrease with Russell favoring his arm over his legs in the pocket. Boy, was I wrong. Not only did Bulldog star Perkins register a 1,104 yard and 13 touchdown season (he's J. Koch), but newcomer Nick Griffin (G. Williams above) had an OUTSTANDING year, slightly bettering Perkins' year with 1,113 yards and 12 touchdowns. You knew Perkins wouldn't be outdone in the long run of the year department though, as he registered the longest rush of the season for State at 80 yards. 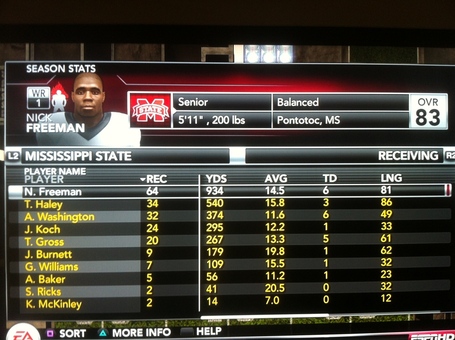 Yay! Chad Bumphis breakout season achievement: UNLOCKED. Finally, Bumphis had the season we've all been waiting for: nearly 1,000 yards (934) and 6 touchdowns. The T. Haley pictured above is Joe Morrow, and A. Washington is Malcolm Johnson. As you can see, Morrow was good in his first year for State, and Johnson was the efficient endzone weapon that we've always needed, scoring 6 times. I believe T. Gross was Jameon Lewis. 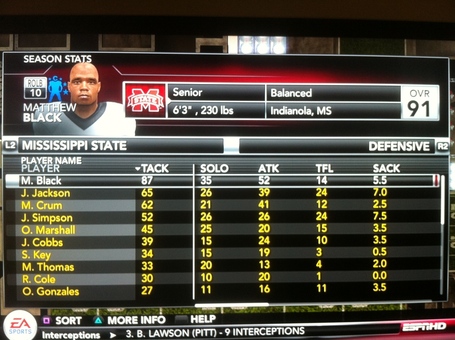 In our first case of "completely botched their race," Cam Lawrence comes in as a skilled tackler and an African American ROLB, who, as expected, led the team with 87 tackles. Oh, and apparently Cam is no longer from Coldwater but from Indianola. 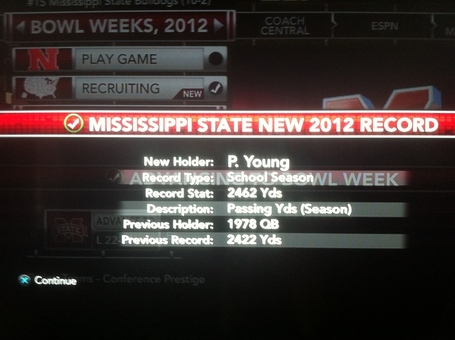 Hey look! We broke that 24 year old passing yards record that was not that impressive standing for too long finally broken. Tyler Russell had the season we all knew he had in him: yes, his tiny little digital heart and his semi-tiny little digital right arm powered this offense to a 10-win season and a new school passing record. MADDEN NFL DRAFT, TINY DIGITAL PORSCHE'S AND DIGITAL CRISTAL FOR YOU MY FRIEND. You've earned it. 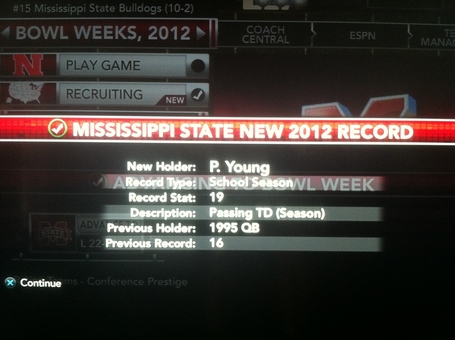 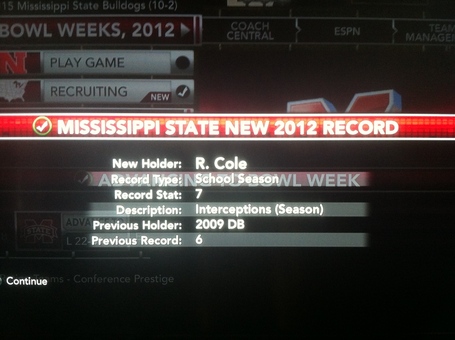 You knew Corey Broomfield wasn't just going to let us have a simulated season without him having a record of his own. Broomfield (R. Cole above) broke the MSU record for interceptions in a season with seven, a record he himself shared in 2009 with several men from MSU's past. He may not be a technologically advanced person and he may even have a go-phone, but dangit, Corey Broomfield is wreaking havoc all up in our digital world. 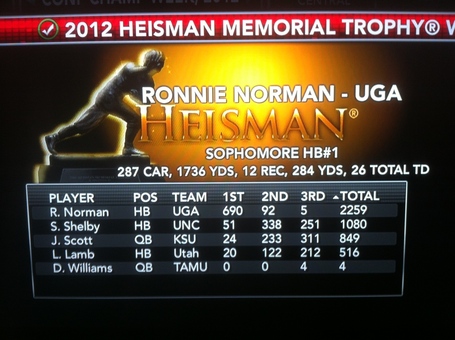 The Heisman campaign that never happened, all because the man who's a fan of lifting Bulldog puppies in the air to announce his commitment is also a fan of guns. Yes, that's Isaiah Crowell pictured there winning the Heisman as a Sophomore. In the O RLY? moment of my simulation, a HB from UNC finishes second, followed by a QB for Kansas State, a HB from Utah, and the new QB from Texas A&M?!?! Oh NCAA Football, that's why we love you, because you always give us outcomes we could have never come up with ourselves, even on our wildest drug trips. 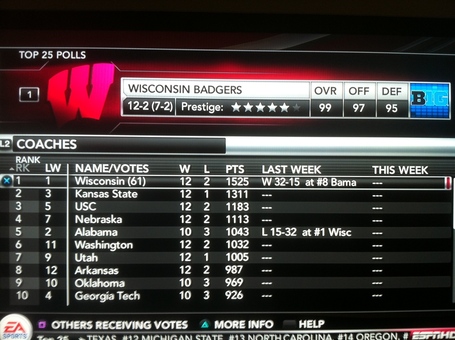 Yep, Brett Bielema wins a National Championship and YOU KNOW WHAT URBAN HOW YOU LIKE THEM RECRUITING TACTICS /spits cheese on the rest of the Big 10. In another unexplainable move by the simulator, Wisconsin navigates a B1G schedule (almost) perfectly, and overcomes some ESSS EEE SEEEE speed from Tuscaloosa in the NC game to win the 2012 championship. I HEARD THE COMPUTER THEY MADE THIS GAME WITH IS BASED IN OPELIKA PAAAAAAAAWWWWWLLLL. 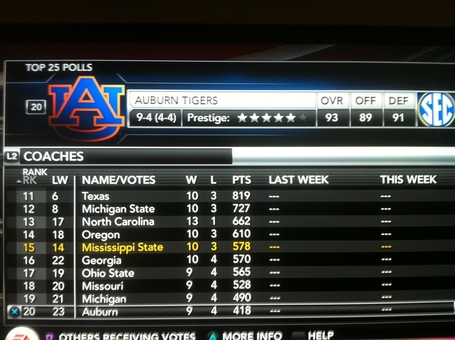 Hey, there we are finishing at a very strong 15th, ahead of fellow SEC members Georgia and Mizzourah. Also, LOL North Carolina is ranked. 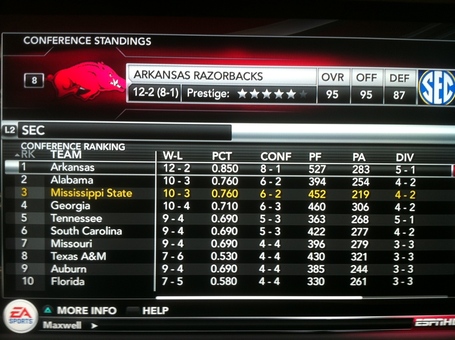 SEC West: strongest conference in 'Muricah. But you knew that already. And State finishes 3rd overall? I think back to several weeks ago when Rock M Nation's Bill Connely asked me what a dream season at MSU would look like? You change that bowl loss against Nebraska to a W and well.... THIS.

Well gang, that's all I had for my simulation of the 2012 MSU football season. As always is the case with the game, some things that happened are believable, and some are just crazy. But one things for sure: if our 2012 season turns out anything like this simulation did, all Bulldog fans, including myself, will be celebrating a record season in Starkville this fall. 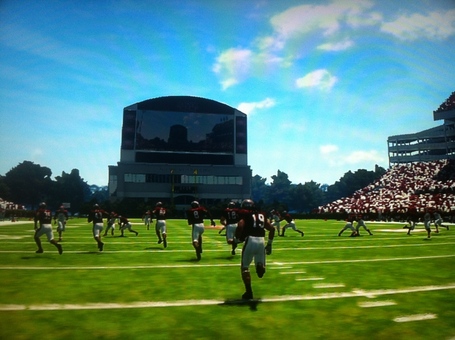 sigh..... the jumbotron is still sitting on TOP of the M Club.