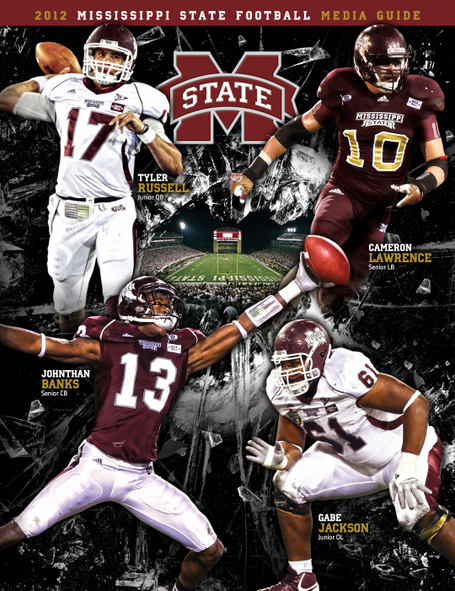 CHRIMMUS COME EARLY. SEC Media Days kick-off today in Birmingham, but we can't all be fortunate enough to sip on banquet beers with the Ol' Ball Coach at the Wynfrey Hotel bar. However, we have other things to be thankful for on this glorious day. Mississippi State released their 2012 Media Guide which for most self-respecting men (or maybe just me) means one thing: Football season is here, and there's no turning back.

HOLY BOB HARTLEY PEOPLE! I've been a media guide slut for as long as I can remember. The glossy pages, the bios, the stats, WILL REDMOND IS GOING TO WEAR #2, WE'RE 6-DEEP AT DT, WE HAD 409 YARDS RUSHING VS HOUSTON IN 2010??, DID I MENTION WILL REDMOND IS GOING TO BE ROCKING THE DEUCE?!! I'd apologize for my over-excited state, but why? It's totally normal for a person to spend hours reading bios that they've read a half-dozen times already, or debate the depth-chart (McKinney or Bohanna at MLB??) until I'm convinced Nikoe Whitley should be playing defensive end. I just can't help myself.