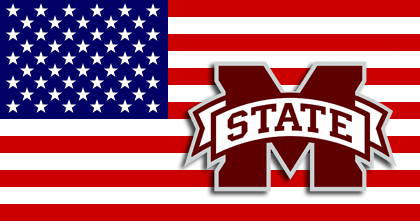 DAY 59: MSU ALL-AMERICANS
AMMMUUURRRICAAAHHH! While we're celebrating freedom, fireworks, and all-you-can-eat buffets, we can also celebrate the fact that football season is less than two months away. 59 days, to be exact. On a day such as today, it's appropriate that we pay tribute to some Bulldogs who were named to All-American teams.
Continue past the break to read about those gentlemen...
THE FIRST - Hunter Cohern and "Buddy" Elrod were MSU's first All-Americans in 1940.
SHORTY - Four years later, Tom "Shorty" McWilliams picked up 2nd-team AP All-American honors.
LONE WR - Marty McDole is the only wide receiver in MSU history to earn All-American honors (1980: TSN), not Eric Moulds.
STAR-STUDDED-DEFENSE - In 1981, the defensive trio of Glen Collins, Johnie Cooks, and Billy Jackson were all named All-American.
FOUR STARS - The 2000 season produced most All-Americans in a single season in the school's history. Mario Haggan, Pig Prather, Fred Smoot, and Pork Chop Womack all collected honors.
THE WAIT IS OVER - After 10 seasons without a player being named to an all-american team, Derek Sherrod (2010: Rivals, CBS, AP...) and Fletcher Cox (2011: PFW) gave the Bulldogs back-to-back All-Americans.