Remembering the Past: 2008 - The Biggest Waste of a Year Ever

Share All sharing options for: Remembering the Past: 2008 - The Biggest Waste of a Year Ever

Being a State fan, it's only natural to punish myself. So if you're game, let's dive in...

In 2008, I was really pumped about the football season. Really. Pumped. MSU was coming off its first bowl game since 2001 and looked to have one of the easiest schedules in the SEC going into the year. So, the summer before I forked over I don't know how many hundreds of dollars to get tickets the Auburn, Georgia Tech, Tennessee and Alabama games. I thought we had a chance to win them all. Hahahahaha.

The first game of the season was against LA Tech. I remember my buddy was getting married that day...right when the game reached the 2nd quarter or so. I wasn't in the wedding so I figured I'd watch the 1st quarter from a restaurant and it'd be okay not to catch the rest because State would win easily. But then we get to the wedding reception and turn on our radios to find a tight game in which we are losing. And then we lose! 22-14. To LA Tech!

But I still went to the Auburn game. They were #9 in the country at that time, but they weren't really that good as they finished 5-7 and Tubs got fired resigned. Here's a view from the seat where I watched the riveting 3-2 affair. 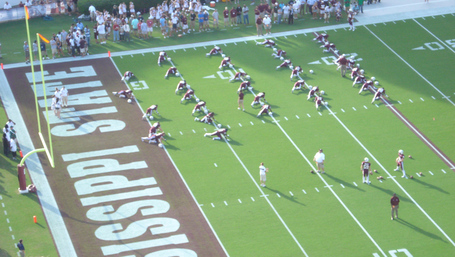 The next week I went to the Georgia Tech game. I didn't bring my sunscreen since it was late September in Atlanta. But that was regrettable, as was the game itself....a 38-7 drudging. We left after the 3rd quarter because I could feel my skin frying and State was playing so awful it might have been the worst sports experience of my life.

Of course, the next week was a loss at LSU - even though they went 7-5 that year, a perfect opportunity to finally beat them. Luckily, 5-0 and ranked #13 Vanderbilt came to Starkville in Game 6 and played absolutely awful so we could win one, 17-14.

So, riding high off that Vandy win I packed up my fam for a trip through the smokies to see the Dawgs play Tennessee. Neyland Stadium was eerily quiet that day/night. It was a beautiful night though - a nice chill in the air. I guess that was my only cancellation as we lost 34-3 to a UT team that finished 5-7 and ended their season with the firing resigning of Philip Fulmer.

MSU managed to get past Middle Tennessee State the next week: 31-22. But the Kentucky game was one of the lower points of the season. UK was mediocre at best and had just lost 63-5 to Florida. This game was in Starkville, yet there wasn't going to be much good coming from the Maroon. A horribly missed extra point was the difference as the Wildcats won 14-13.

Two weeks later, in the bitter cold, my wife and I said what the heck and went to see us play newly-crowned #1 Alabama. State was actually winning 7-5 late in the 2nd quarter....but that was it. Things quickly changed and we got blown out 32-7.

The silver lining for the whole season came against Arkansas. In rebuilding mode under first year head coach Bobby Petrino, State finally beat the Pigs for the first time in 10 years, 31-28. The next week was lowest point of the season: 45-0 to Ole Miss.

It was a monumental waste of a season. A team, coming off a bowl win, regresses so much they barely win a few games against mediocre competition. What's most frustrating is that Tennessee, LSU, and Auburn were all ripe for the picking. Kentucky should have been an easy win. There was really no reason not to go 9-3 in 2008, yet Croom got himself fired resigned because of this horribleness that resulted in a 4-8 season.