I'm sure we've all been there. After a disappointing loss at Humphrey Coliseum, we walked back towards our dorm/apartment/nearest watering hole while telling our friends "if it was up to me, I'd fire _______ TONIGHT!". It's perfectly natural to feel that way (especially as a State student/fan) after a loss, but you never thought you actually had the power to influence the decision to fire a coach though, right?

Well if you thought that as a student during the 1976-77 MSU basketball season, you were WRONG my friend. 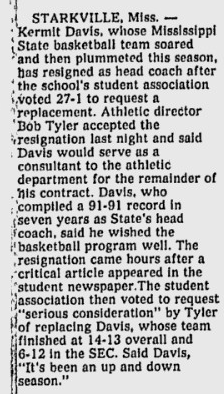 The 1976-77 basketball season started off great for Mississippi State, as the Dogs raced to an 8-0 start, including wins against Texas and Wake Forest. But coach Kermit Davis' squad would finish in pitiful fashion, winning just 6 of their final 19 games that year, and finishing with a disappointing 14-13 record.

After 7 seasons with Coach Davis at the helm and none of those including any more than 16 wins, Bulldog fans were resoundingly fed up with Kermit, and they wanted him gone. Among those tired of Coach Davis' tenure were the Mississippi State students at the time, and they made their displeasure known soon after the season's end.

After the season was completed, the Student Association (SA) for MSU convened and in a 27-1 vote, requested to the Athletic Director Bob Tyler for Coach Kermit Davis to be removed and replaced.

AD Tyler accepted Coach Davis' resignation shortly thereafter that request from the SA, and his seven year run in Starkville was over.

In the Miami News article pictured to the right, Davis is quoted as saying "It's been an up and down season." Looking at the schedule and results for that year, and that statement has never been more true.

This bit of history may not seem that interesting or newsworthy to you guys, but to me this just struck me as so unique. As a former student and alumnus of MSU, I would NEVER in my wildest dreams have ever thought that any vote I would have partaken in would have influenced the hiring or firing of an athletic coach at the school. Who knows, maybe this happened during my time at State, only to be squashed by a strategic delivery of Bryan Juicy Jumbos by Mio to the SA's president's dorm room.

This has been your weird/interesting MSU History lesson for the week. Now go shoot the rest of those roman candles you have from the comfort of your half deflated kiddy pool.