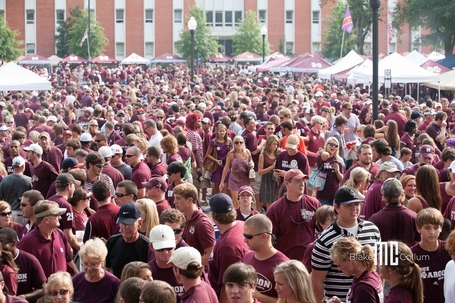 I like to judge the greatness of all tailgating games on this criteria: what is the probability a redneck invented it? Ya know, since I are one. Tossing bean bags into a hole, bouncing ping pong balls into cups of beer, throwing horse shoes at a stick in the ground - none of these were developed by guys wearing tweed, amirite? The corn hole board I made looks like a three-year-old drew a circle and I cut it out with a chain saw.

Last weekend I was at the lake when I was introduced to a game that takes the cake. Maybe you've heard/seen/played this game before, but it is new to me - and it's the perfect po' boy's tailgating game.

That's what it looks like when folks from Madison play. I didn't want to expose y'all to a picture of me playing in my hair vest. As you can see, overweight fellers can play the game. Over his left shoulder you can see the bottle sitting on top of the PVC (you can use 1 1/2 or 2"). It takes 4 people to play....hopefully there was enough in the coffee cans to afford the supplies.

Next thing you need is a frisbee. You'd probably never guess this, but you throw the frisbee at the bottle. I was able to instinctively figure that one out because my 3rd cousin probably invented this after he was kicked out of the zoo for heckling the monkeys.

If you're not throwing the frisbee then you are playing "defense"....or as the inventors call it - stoppin the stuff that's flying around from hittin the dirt. To do this you must stand behind the plane of the bottle-holding PVC stick. I was unable to grasp this concept because I was wearing jorts at the time, but apparently it's an invisible horizontal line that you can't cross.

One kicker: you must play the game with a drink in your hand. Eric Church should have no problem playing this game, and neither should you even if you only have one hand - it's handicap friendly as with all other redneck-invented tailgating games.

Hopefully this game will make it to the Junction and other areas around campus this fall. It's a lot more fun than socializing under a chandeliered tent while eating mini-keishes.

*the last part of this post is centered because I can't use a computer right. Don't let nobody tell you we ain't rednecks.