Is There Enough at RB if Russell Can't Get it Done?

Share All sharing options for: Is There Enough at RB if Russell Can't Get it Done? 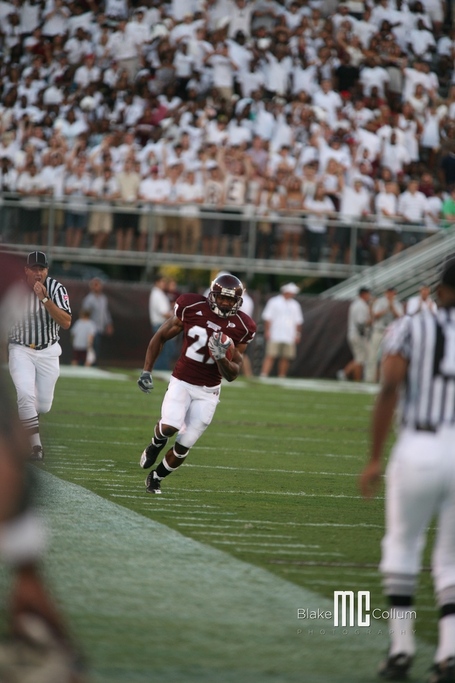 We've said it a million times - MSU will be throwing the ball more now that Tyler Russell is the quarterback. Not only that but the WRs are deep and Vick Ballard is in the NFL. A lot of people including me expect Russell to break some school records this year, but what if he doesn't? What if Les Koenning has to go back to more running than throwing? Is there enough at running back?

There are four guys at tailback coming in: LaDarius Perkins, Nick Griffin, Josh Robinson and Derrick Milton. Plenty of great things have been said about all of these backs at one time or another. They are all young and athletic. They all bring something different to the table...there is a lot to get excited about.

But do we have anything to hang our hat on with these tailbacks? Josh Robinson and Derrick Milton are both redshirt freshman so they have zero experience. Nick Griffin is a redshirt sophomore and he hit the field twice last year against UAB and UT-Martin in mop-up duty. Perkins is the junior and has had some big games for State - he has 988 career yards rushing, 306 receiving and five touchdowns by each.

All told these four RBs have 1,096 combined yards at Mississippi State. Vick Ballard had 1,189 last year alone. If Russell and the wide outs open up the field I have no doubt this group can re-produce Ballard's production...but what if the passing game doesn't shape up (as it usually doesn't in Starkville)?

Most people, including myself, tend to just say MSU will be fine at running back because we always are. I can't remember a time when we didn't have a good back. The string of great backs, or combo of backs, has been very impressive.

With an inexperienced offensive line, will this stable of RB be able to produce if the passing game isn't up to par? Or will they need to? There has been hinting that the 2012 defense could be the best since the legendary 1999 D. I certainly wouldn't be caught dead saying this D is as good as that one, but there is something to consider about that '99 team. It was the 2nd worst rushing team during the 1991-present span at 102 yards per game....only 2006 was worse (95). Dontae Walker led the team with 384 yards, Dicenzo Miller had 238 and Justin Griffith 196.