Share All sharing options for: Farce Friday | BREAKING CRISTILMETHOD RECEIVED A LETTER TOO

There has been a good bit of talk in recent days about a letter, obtained by the media via a FOIA request, from MSU to a booster, disassociating the school from the individual for his actions involving impermissible contact with a recruit, who has been presumed to be Will Redmond.

But what HAS NOT come out in the news (typical liberal media) is that on the same day, July 13, MSU wrote me a letter as well, addressing several concerns I had and some "irregular donations" that I made. Through a FOIA request I made to my wife earlier this week (a pretty please note attached to an expensive bottle of red wine), I was able to obtain a copy of said letter for display here at this site. Let me preface the revealing of this letter by saying that FWtCT is the ONLY news outlet that has a copy of this letter - no other members of the media in Starkville have viewed this document until now. You can view the letter in its entirety after the jump. 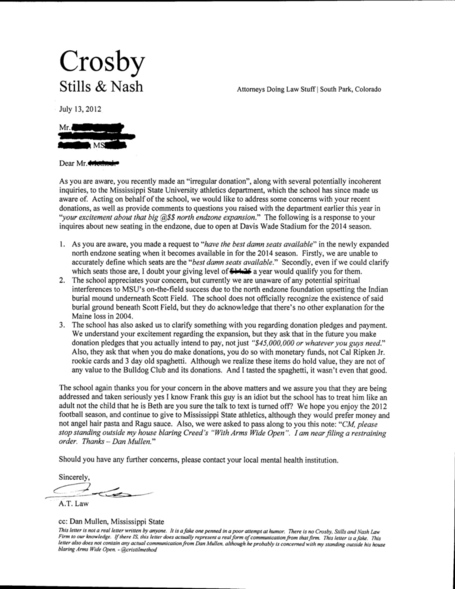