There's just something about starting a week off after a big win. Now, let's not kid ourselves, Auburn is not going to have a great season, and State should have won that game Saturday. But the point is we finally did win, instead of another season of shoulda, woulda, coulda's. And now we'll spend the next 4 weeks trying not to let ourselves stumble over stones en route to what could be a huge showdown on October 13th in Starkville with Tennessee.

Back to Saturday: man, what a fun day. The rain held off (during the game at least), State played sound on both sides of the ball, and shoot, I was even given free tickets on Friday to attend. Truly it was a perfect weekend, and as you can imagine being a State fan, that scared the bejesus out of me. But, BUT, it appears that sometimes things do go smoothly in Bulldog country, and as we sit here on Monday morning, all is right in the world.

Did any of you guys and girls make it to the game? Let me know what you thought. If you didn't go to the game or you want to relive the victory all over again, then fear not, because we have a JAM-PACKED News and Notes today, filled with all sorts of tid bits, videos, pics, and other analysis from Saturday's 28-10 victory over Auburn.

Animated Drive Chart brought to you by Gameday Depot.

Jonathan Banks gets his 1st INT of the day (via RobNolaDog)

Tyler Russell and Marcus Green do it again (via RobNolaDog)

Jonathan Banks is greedy. Picks off Frazier again (via RobNolaDog) 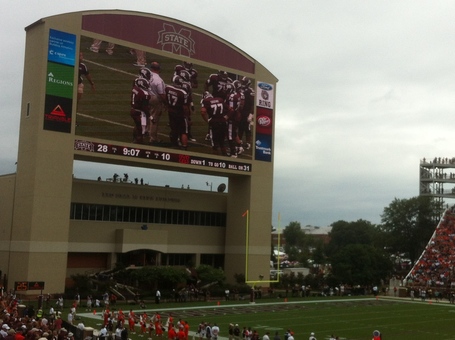 RT @kyleniblett: Reminder: @coachdanmullen is 21-0 at @mstatefb when holding a lead at the start of the fourth quarter

Sixteen of 60 AP voters placed Mississippi State on ballot. @tommurphyadg and @cbfowler had Dogs highest at 16 and 18, respectively.

That's it for today folks. Have a good one!