FWtCT Follies at the Movies | Byron De'Vinner in 'Liar Liar'

Share All sharing options for: FWtCT Follies at the Movies | Byron De'Vinner in 'Liar Liar'

I love cinematic adventures, don't you? There are few things in a normal 9-5 man's life better than scooping up his best girl and going down to the local theater to catch a two hour production on superheros, glittery vampires, bachelor parties gone wrong, and so forth. Now a lot of people as of late have been gushing about movies like The Expendables 2, The Dark Knight Rises, The Bourne Legacy, and The Campaign. But there's a brand new movie, one that received very little advertisement and promotion around these parts until earlier this week, that's gotten the attention of movie goers all over this great state.

Memphis 7on7 coach self-made film director/producer/actor Byron De'Vinner, who has directed and starred in previous films such as 'Take the money and run,' 'Where's Mirando?', 'Weekend at Waverly', and 'The Byron Supremacy,' released this week a new film that despite its short time in the theater, is already making waves through the film community throughout the state of Mississippi.

Liar Liar, which was produced by, directed by, and stars Byron himself, is a tale of one man's journey to spread his message across the state of Mississippi, Tennessee, and Alabama. As we follow the lead character's journey, we notice that his story changes throughout, evolving from one of innocence to one of intrenched involvement in the main plot. Liar Liar is a film about a man and his story's progression, all happening without him ever realizing it. The film also features subtle undertones of how one lie in life can snowball into another, and another, rapidly transforming the lead character's message into one even he isn't sure is real anymore. You'll laugh, you'll cry, but most of all, you'll gaze in wonder as you watch De'Vinner, almost as if he'd lived it himself, spiral out of control into the pitfalls of despair, realizing that in the end, no one believes his message. A truly harrowing tail. 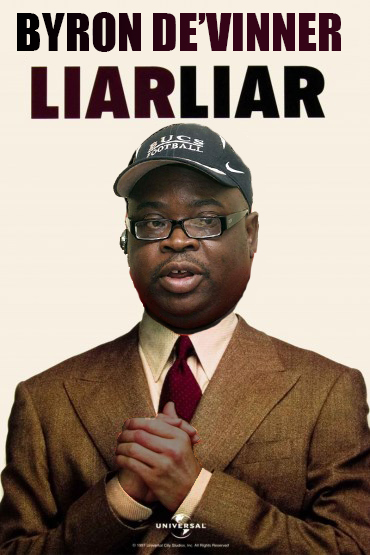 You can check the film out exclusively throughout the state of Mississippi, Alabama, and also portions of western and central Tennessee. For $20 extra, De'Vinner will throw in an alternate ending, written to read however you want it to.

Tune in next week when we review the latest installment in the revived monster battle movie genre - DeVinnezilla vs. SCHAD | Battle for Recordokyo. Until next week, everybody! 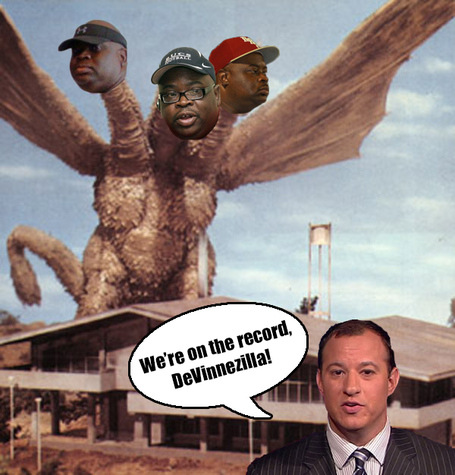 hats off to our own robnoladog for the outstanding movie posters you see above.