Draw It Up | Russell to Bumphis on the flag route TD

Share All sharing options for: Draw It Up | Russell to Bumphis on the flag route TD

While you're anxiously waiting for tonight's 6pm kickoff at Troy, let's take a look at a key play from last week's 28-10 victory over Auburn. We will break down why State was successful on Tyler Russell's 13 yard touchdown pass to Chad Bumphis in this week's edition of Draw It Up.

It still feels weird as a State fan, watching the replay of last Saturday's game and seeing State in possession of a legitimate passing attack. Dropped passes, poor QB precision, no blocking: all these have plagued us in the past, but it appears that may not be the case this season, at least not to the extent that we're used to. Last week, Tyler Russell threw for 222 yards on 20-29 completions with 3 TD's, 2 of which went to TE Marcus Green. What impressed me the most was that although Russell, at times, held the ball a bit too long, he allowed plays to develop and players to work themselves open, which is was happened on all 3 touchdown passes. Let's take a look at Russell's 13 yard strike to Chad Bumphis from last week's game to see what went right. 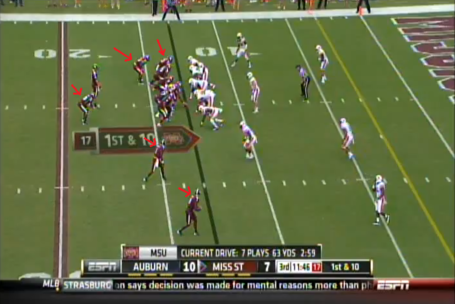 The first thing we look for here is: where are my skill guys? Anyone who is eligible to catch a pass. As you can see, I only have two guys split out wide at the receiver position, with Marcus Green and Sylvester Hemphill tight on the left, and with LaDarius Perkins in the backfield along side Russell. With this formation, the most likely play calls are most likely a counter to Perkins with Hemphill pulling to lead, some sort of pass play involving Green, Bumphis, and Smith, or there is also the potential, albeit a minimal one, for Russell and Perkins to run option right.

Just after the snap 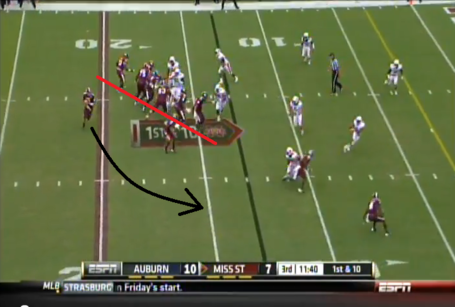 After the ball is snapped and the play begins to develop, I start noticing things. First off, I notice that this is a designed rollout for Tyler to the right. Secondly, I see that Green and Hemphill both stayed in to block, creating a complete wall on my QB's backside, leaving the only people who could still tackle him in his line of sight. The third thing is that with Green, Perkins and Hemphill all left in to block, that means I have two guys, Chad Bumphis and Chris Smith, who are running routes on this play, unless by some chance Green sneaks out on the back side on some kind of delay route. At the freeze point for this diagram you can tell that Smith is beginning to make his turn, either to go back across the field or curl 5 yards off the line of scrimmage. Bumphis continues up the hash, in what we assume will be a deeper route than Smith's 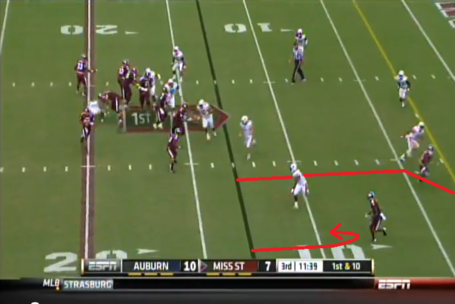 As the play continues, I immediately take notice that my backside line of protection has held up very well. On the routes, I can now see that Chris Smith has curled 5 yards off the ball at about the 7/8, and it appears that Bumphis is going into a flag route to the corner of the endzone. Now at this point, Chad is covered decently, but also at this stage of the play Russell would not throw the ball to Chad, as Bumphis is in his turn. With 9 Auburn players in the shot's view, I know that their are 2 guys off-screen still with a chance to hinder Bumphis' route, with one man maintaining inside coverage. 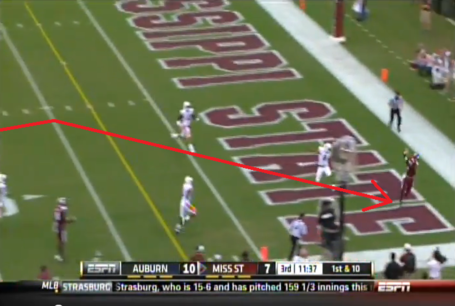 What impressed me about Russell Saturday was that he did not force the ball, at least not on this play (he did so on several others plays, however). Let me rephrase the statement: Tyler did not force throws as much as I have seen other MSU QB's do in the past. What Tyler does here that allows the play to work is he waits just that extra second or so, allowing Chad to slip between two defenders and behind the safety. Tyler then throws the ball where only Bumphis can grab it, and bam - touchdown, MSU!

Although plays like this can sometimes be unproductive due to the lack of options, they are still important parts of any offensive playbook. Keeping in max protection allows Tyler the comfortability to know his backside is protected, leaving all the remaining defenders in his line of sight. On the play, he had two options: both of which he can see in the same line of sight, which gives him the advantage of not giving himself away. The worse case scenario here is neither Smith nor Bumphis are open, and Tyler simply throws the ball out of bounds, moving on to second down.