Share All sharing options for: The View from Section 202, Row 3 Seat 5 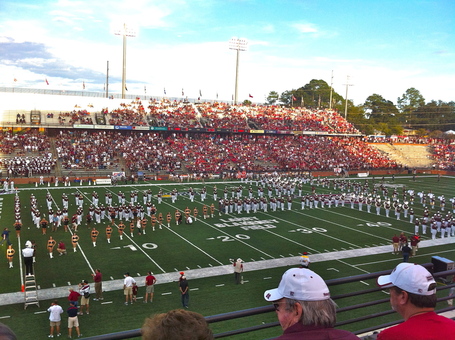 To say the Mississippi State Bulldogs lucked into their 30-24 victory on the road against the Troy Trojans would be truthful, but saying the Bulldogs stole the victory might be more accurate.

Here are a few things everyone knew going into the game:

The game left me with these five quick thoughts:

BONUS: Larry Blakeney Field has an awesome vibe to it. I mean this in a positive way, but it felt like a super-amped prep football game. Yes, the lines were too long (especially will-call),but the dug-out stadium means everyone has a good seat. I loved the bowled in area of the field. Their band plays good songs and tries to entertain. When the Trojans score, a party breaks out in the stadium. To top it off, everyone I met associated with Troy could not have been kinder. This includes their IMG staff, their game day ops people, beat writers, and fans. Taking my two-year old to his first game, I feared that the crowd could be mean. The opposite was true--props to Troy of making a road game fun.I