Share All sharing options for: FWtCT Game Perspective vs. JSU 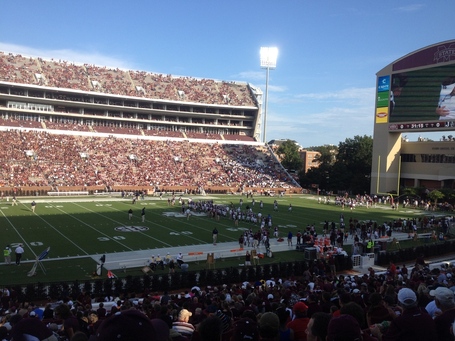 (My slighty-scrunched view at yesterday's opener versus Jackson State)
I realize that it was Jackson State AND the first game of 2012, but I wanted to elaborate a little on what I saw personally from the 56-9 shellacking the Dawgs gave JSU yesterday evening at Davis Wade. AGAIN, I know it's early but here are my five 2012 first impressions:

1. Tyler Russell is cool, calm, and collected, y'all. The dude looks like he has more experience than the off-and-on junior that he truly is. He's had to play behind Chris Relf for two years so it hasn't been an easy task to assume the position of offensive leader, but he looks like he will fit in nicely with the talented receivers he has to work with in 2012.

2. Speaking of receivers, State is deeeeeeeep at that position. No surprise given Dan Mullen focuses a lot on offense but with Tyler, these dudes can catch (unlike JSU) and dodge defenders. And Tyler isn't scared to line one between two or three defenders. That says a lot about our quarterback but I feel it says more about our confident receivers. I mean, Chad Bumphis had ONE reception on a big 3rd down and it resulted in our first touchdown of 2012. Not amazing but effective nonetheless. I look forward to seeing a lot of Joe Morrow, Chris Smith, Arceto Clark, Jameon Lewis, Brandon Hill, Marcus Green, and Robert Johnson (not the one that sold his soul to the devil). Heck, put Darius Slay and Johnthan Banks in there for a few offensive snaps.

3. A good kick off man will pay dividends in the long run. Yeah, I said that right. Especially when we start facing some mega kickoff returners in the SEC. State had nine kickoffs for 564 yards, three touchbacks, and an average of 62.7 yards per kickoff. Nice job, Brian Egan and Devon Bell.

4. Our team is well-disciplined. Yellow flags have been an enemy of the Bulldogs in seasons past. State only had six for 64 yards yesterday. I know, it's early. But usually scrimmage is typically sloppy for most teams early. This week against Auburn will tell a lot about MSU's offensive and defensive discipline.

5. Home games are actually fun. State fans have contributed greatly in the last few years and 55,082 peeps came out yesterday. This was State's 17th-straight sell out. That says a lot given when I went to school at State almost ten years ago. Ugh. Bad memories all around. I couldn't help but imagine what the stadium will feel/look like when the massive addition comes in a few years. /chills.

FYI: JSU's Sonic Boom of the South was entertaining but not what I remember from years ago. Props to those folks who are a part of it but it just didn't seem as amped as it was in the past. They are dedicated and passionate though. Eh. Maybe I'm just getting old and senile. Peace out.