Draw It Up | Perkins and the Delay Draw

Share All sharing options for: Draw It Up | Perkins and the Delay Draw

Besides being more visually appealing to the fan to watch on Saturdays, the presence of a passing game for any team's offense opens up a plethora of additional options in terms of play calling. If I'm a one dimensional offense, then the opposing team's defense doesn't have to respect my ability to do the other, and then can therefore stack the box or drop seven each play, depending on the strength and tendencies of my offensive unit.

For State, the ability to throw the ball vertically down the field this season has opened up the running game a bit out of the spread formation. In previous seasons, State could run the ball via the option or a counter, but when spread out, defenses tended to watch more for the run than for the pass. This year, with Tyler Russell's ability to strike through the air on any play, you are seeing defenses spread a bit more to cover a 4-wide type set, which leaves lots of real estate for a speedy LaDarius Perkins to maneuver through. Let's look at an instance from last Saturday's Troy game where Perkins was able to be successful in this type of situation. 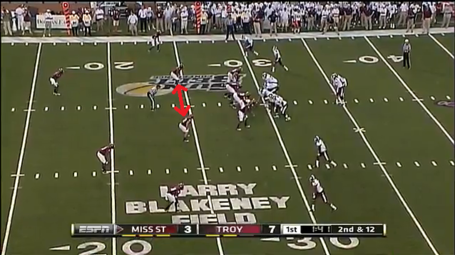 The first thing we notice prior to the snap is just how spread out the defense is. Troy sets up with 2 LB's in coverage and 1 LB off the left edge, 4 DL's, 2 CB's and 2 Safeties. With the 4 wide, single back formation State is set up in, this spreads the defense, allowing for a good deal of open real estate in the middle. Let's see if LaDarius can take advantage of that

Moving beyond the line of scrimmage 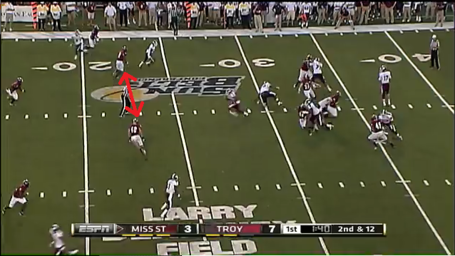 State let's the Troy rush ends come up field, pulling them away from what will be the eventual point of attack up the middle. The few seconds of delay built in on a delay handoff allows for the receivers to push the cornerbacks up the field, as well as it allows the defensive lineman to progress into the backfield, where you want them. At the point of the screenshot, we notice the gap that still exists up the middle as Perkins passes the line of scrimmage. He appears to have one LB assigned to him, with safety help behind that. Let's see how he attacks the defense from this point on. 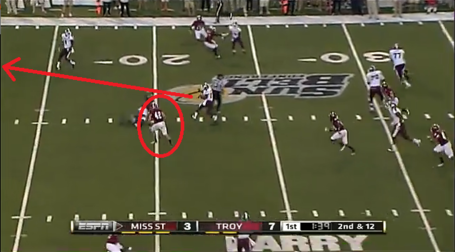 LaDarius allows the safety seen in the previous shot to progress towards him, then makes his cut to the right. Once Perkins makes the cut, the safety loses his footing on the turf, leaving one man, the circled LB, who is capable of making a play on Perkins for the last 20 yards. Let's see how he does in his mission to try and tackle #27. 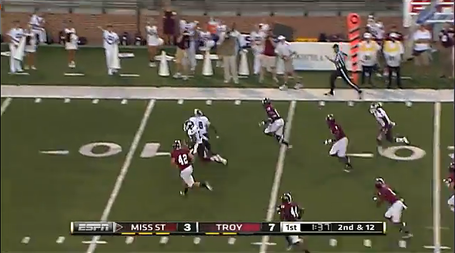 Once Perkins sees the safety slip he does what he does best - he accelerates. Perkins takes off, turning the play into a footrace between him and #42 Brannon Bryan. Who do you think will win that race? No offense to Bryan, but my money is not on him. With Chris Smith flanked to the right protecting LaDarius' backside, Perkins simply has to outrun Bryan to hit paydirt in the endzone. 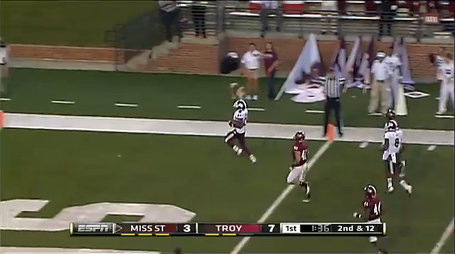 You knew this was how it would end. A perfect ending to any play, and one that, in this case, shows how a respectable passing game can open up a solid run game from the spread formation.