Share All sharing options for: FWtCT Picks the SEC - Week 5

It's that time again folks. Even though our own beloved Bulldogs are taking the weekend off, we aren't taking off from our weekly picking of the SEC games. Last week was another pretty uniform week across the board with our picks. Let's take a look at what transpired last week, shall we?

Week 4's slate of games featured a lot of matchups that were pretty easy calls. South Carolina State at Texas A&M, Vanderbilt at Georgia, Kentucky at Florida? Most of the games could have been selected in someone's sleep. It turned out that two games, Rutgers at Arkansas and Clemson at FSU, ended up being the dividing lines between who went 11-0 and who went 9-2 in week 4. 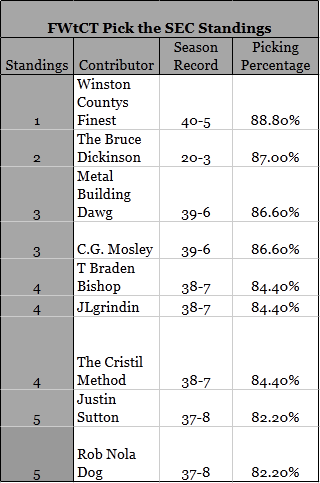 C.G. Mosley continued his climb up the FWtCT's standings with his best week yet, picking a perfect 11-0 set of games. Right behind Chris was virutally everyone except yours truly, who picked both Arkansas and Clemson [slaps face]. It turned out that a lot of us had too much faith in Arkansas and Tyler Wilson's return and its impact, as only robnoladog and C.G. had the foresight to see the hogs for what they really are in 2012: tuuurble. Rob, however, joined me on the "buying into Dabo too much" train as we both jumped back from the norm and picked the tigers to win in Tallahassee, which they were unable to accomplish. Another year, another hyped Clemson team loss. Use, rinse, repeat. Outside of those two games, literally everyone picked the same on every other game, which is understandable when you look at what we had to work with. Now let's turn our attention to week 5 and what we see shaking out in a short set of games. 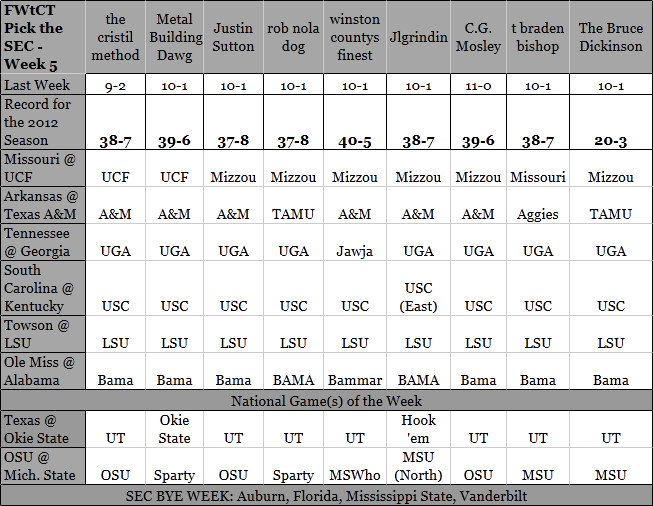 [Sigh] Another fairly dull weekend of games to pick from in the SEC. The highlighted game of the week in conference is probably (or would have been rather) either Arkansas at Texas A&M or Tennessee at Georgia. Now? Those games are easy picks, as both home teams should prevail fairly easily. Missouri does travel to Central Florida, which to me is a more difficult test for them than most probably think. They are still banged up from last weekend's punishment at Columbia, and Central Florida isn't a pushover [Bianchi lovefest goes here]. The rest of the SEC schedule for week 5? Blowouts gone wild. You have South Carolina at Kentucky, Towson at LSU, and Ole Miss at Alabama. I wonder who will win those 3?!?!?! /sits on edge of seat in anticipation //Alabama scores 40 in 1st Quarter.

In the national games of the week, Texas travels to Stillwater to take on Oklahoma State, and Urban Meyer's Buckeyes travel to East Lansing to battle with Michigan State. For the most part the guys are all taking the higher ranked teams in these games, with a few taking the underdogs. Overall, should be another fun weekend full of football, great weather, and maybe a beer or two.

Who are you picking this weekend?