After 5 days in a little slice of heaven tucked in northwestern Alabama commonly referred to as Smith Lake, I'm back in the blogging saddle, here to get your ready for the big game with the barners this weekend. Many thanks to Metal Building Dawg for covering for me, and if you enjoyed his news and notes more than mine WELL KEEP YOUR OPINIONS TO YOURSELF THIS IS A DICTATORSHIP NOT A DEMOCRACY.

Now that that's settled, on to the news and notes!

- The new uniforms look outstanding. No complaints from me at all.

- Man, I expected to see Derrick Milton at some point this season, but this much? Milton led State in rushing Saturday with 65 yards on 8 carries and 1 TD, and looked really good out there. Milton is a big, strong back, and should do his part helping to fill the empty power back spot left by Vick Ballard's graduation. Milton was one of 4 Bulldog running backs to carry the ball Saturday, but if he continues to register solid numbers, look for his work load to potentially increase this fall.

- I like the brick on the front of the East and West sides of the stadium. Looks great. 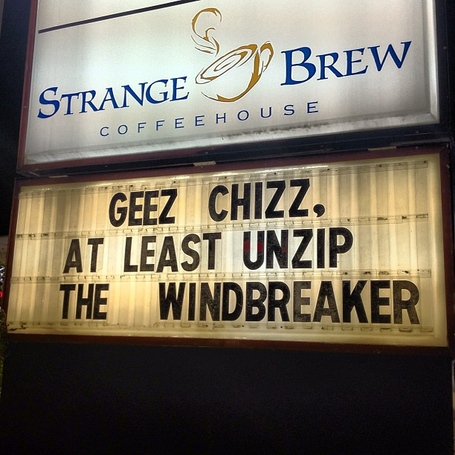 via Brew's Book of Face

We would never accept taunting of Brian VanGorder's Miami Vice mustache or his 80's cocaine dealer haircut, but frankly I'm glad someone brought to the world's attention Gene Chizik's utter refusal to WEAR HIS SHORT SLEEVE WINDBREAKER LIKE SOMEONE WHO ISN'T 96 YEARS OLD OHMAGOODNESS IS THAT A DRAFT I FEEL ON MY NECK IN THIS 200000 DEGREE WEATHER? #SBCoffeehouse4Fashion #AllFashion

Sorry for the short N&N session this morning but I was short on time, getting back into town yesterday afternoon. Promise N&N will have more for you tomorrow in the AM! Have a great day, and remember, it's OKAY to call him $cam Newton this week, because it's Auburn week.