Well, Kentucky is finally out and Southern Miss is in. Yep, you read that correctly.

KENTUCKY was spared the chopping block last week, but the Wildcats have given me zero choice after last night's loss to Alabama. As much as I dislike the Wildcats, I've spewed plenty praise for John Calipari's one-and-done program over the last few weeks: "They're young...just wait until they reach their potential...loaded with talent...never doubt Calipari..." I still find it hard to argue with their national title last season, and their Final Four and Elite Eight appearances the two years prior. However, this is obviously a new season and Big Blue hasn't done anything deserving of a spot in the bracket.

THE TOP SEEDS are so difficult to pick right now. All of the 2-seeds, Lousville, Florida, Arizona, and Indiana, have great cases to be 1-seeds. The next few weeks should be exciting to see who takes hold at the top.

OLE MISS has probably peaked in their rise up the bracket. They could get as high as a 5-seed, but the SEC is too weak to help them go much further...unless they win the conference title.

BUTLER is for real...like, could win the national championship good. In a year where there is no sure-fire #1, Butler has as good a shot as anyone to win it all. Hell, they've been there twice already. 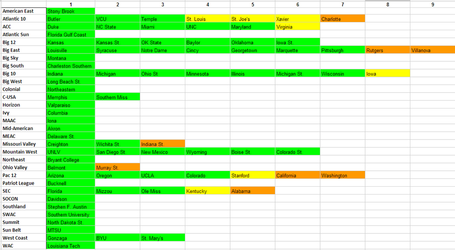 What do y'all think? Comments are encouraged!