With baseball season only four days away, we take a look at how MSU stacks up at each of the fundamentals, starting off with defense.

Share All sharing options for: Top 5 reasons to be excited about MSU baseball for 2013: #5 - Defense

With baseball season just a few days away, we wanted to take a look at what the 2013 team has to offer. Over the next several days leading up to Friday's season opener, we'll take a look at the five biggest reasons you should be excited about this year's version of the MSU baseball team.

Leading off (DEFINITELY pun intended) our discussion of the 2013 MSU baseball team is a look at the squad's defense -- an area that MSU was rock solid in in 2012. With the majority of the fielders returning, plus a few key players returning from injury, 2013 is definitely a year where I would expect improvement from MSU's defensive unit.

Starting things off behind the plate, there may not have been a more rock-solid option in the SEC last year than MSU catcher Mitch Slauter. Slauter caught nearly every game for State in 2012 (62 of 64), and despite that workload, gave up just nine passed balls for the season, good enough for 6th best in the SEC. Slauter isn't a flashy guy behind the plate, but he was one of the more solid catchers that I can remember in recent MSU baseball history. He also managed the SEC's best pitching staff in 2012 -- a staff that mostly returns again for this season. Having Slauter back behind the plate this season is big for the Bulldog defense, and should be big for the pitching staff as well.

The return of a healthy Daryl Norris added to Adam Fraizer and a lighter Wes Rea should make for a much improved defensive infield. The Bulldogs did turn an SEC leading 71 double plays in 2012, but they also recorded the third most errors in the SEC with 81. A lot of that could be contributed to issues with replacements at 3B and 2B, but those positions should be more shored up this year. Norris is solid defensively at the hot corner, while newcomer Brett Pirtle should make for a more stable option at 2B. Frazier is known more for his hitting, but another year under the belt should see him get better defensively as well. And over at first, I would count on another good year from Wes Rea. In starting 63 of 64 games last season, Rea recorded just three errors on the year, and with a 6'5" frame, he gives the rest of the infield plenty of a target to work with on put outs.

With the return of Bulldog center fielder C.T. Bradford to the lineup full time this year, the outfield will definitely become one of the better defensive units in the SEC. Bradford, along with Hunter Renfroe and Demarcus Henderson, will make up one of the fastest outfields in the SEC this year, and one of the better overall defensive units as well. Throw into that mix newcomer and speedster Jacob Robson, and you may have the fastest outfield in the SEC. Both Renfroe and Bradford have plus arms as well, making the outfield unit even tougher to face. In 2012, Renfroe set the MSU record and led the SEC with 10 outfield assists. 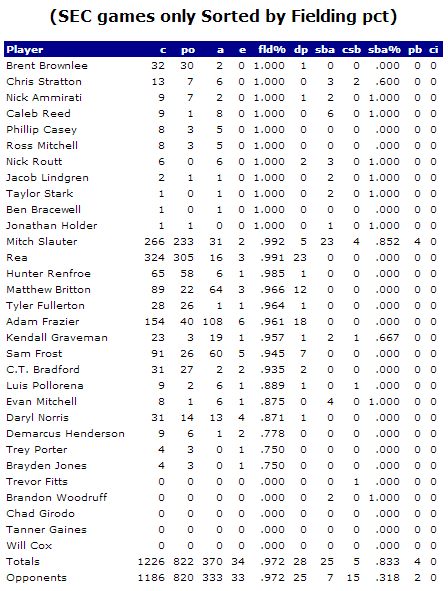