On the eve of National Signing Day, let's take a look at which college hoops teams are committed to the Big Dance and which teams are flipping.

I was busy making my official visit to Le Cordon Blue College at Minneapolis last week, so I apologize for the lack of a bracket. I did learn how to make a mean frittata, so I give that visit a B+. However, I am still committed to University of Phoenix, and despite message board rumors I DID NOT log-on for an unofficial visit during my two nights in the Twin Cities. Now, to the bracket...

PRIZED RECRUITS (Chris Jones): Indiana is back on top after their win vs. #1 Michigan over the weekend. Cody Zeller may get the POY buzz, but Victor Oladipo is the guy that makes the Hoosiers go. No one predicted that Miami would have a two-game lead in the ACC standings through 8 games, but the 'Canes are on top in a big way after beating Duke and NC State. They're #4 in the country in defensive efficiency (KenPom) and might be the most athletic team in the country. If there is a school that knows a thing or two about football recruiting and hoops it's Florida. The Gators have been flat out dominant against the SEC. They took out the next best in the league, Missouri and Ole Miss, by an average of 22.5 points. Oh yeah, and they are the nation's #1 team according to KenPom.

DIAMONDS IN THE ROUGH (Johnthan Banks): Larry Eustachy is a hell of a Natty Light drinker basketball coach. He's about to make Colorado St. the fourth school he's led to the NCAA tournament. The Rams are balanced, 12th in off. efficiency/41st in def. efficiency, and will be trouble for whoever draws them in the tourney. Belmont has been to the NCAA tournament five times, but this could be the year that the Bruins finally upset somebody. Shooing 40% from three as a team will scare a lot of coaches.

BUST POTENTIAL (Ryan Perrilloux): The suspension of James Southerland has created problems for the Syracuse offense. Michael Carter-Williams and CJ Fair are being asked to play nearly 40 minutes a night in Southerland's absence. I sense a team that will run out of gas come tourney time. Remember when I said Butler was a national title contender? Well, they still are, but they have been (in football recruiting terms) much more like Kentucky than LSU lately. Losses to La Salle and St. Louis show that this team is equally capable of being a middle of the pack Atlantic 10 team as they are a Final Four participant. 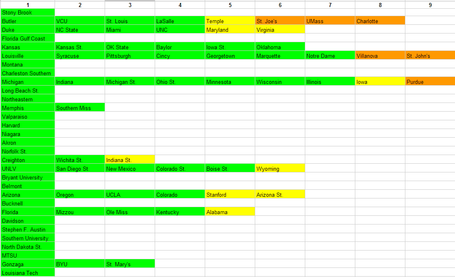