The field is set. And Nashville could get a little interesting this week when a top-heavy SEC kicks off their conference tournament tomorrow.

Right off the bat, who has the bracket advantage? 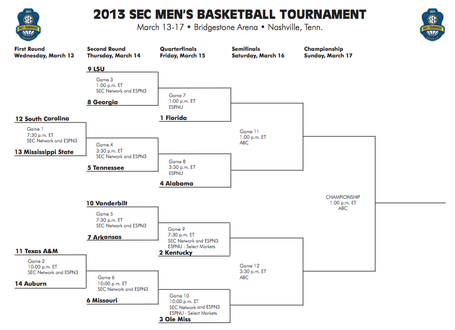 It's really a tough draw for everyone. But before you start to decipher, let's take a quick look at the SEC resume. 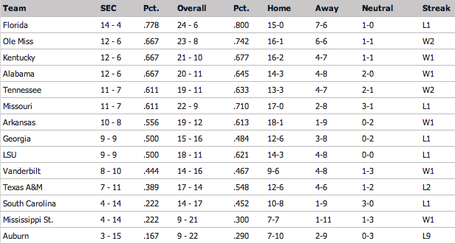 When a team plays well towards the end of the regular season they tend to ride a small wave of momentum when entering the tournament. Not saying Ole Miss or Tennessee will pulverize everyone in their way but they're the only two teams coming into the field with a two-game winning streak. Kentucky, Alabama, Arkansas, Vanderbilt, and Mississippi State won their season-enders; Florida, Missouri, Georgia, LSU, and South Carolina lost theirs. Texas A&M lost the last two. Oh... and Auburn, THE WORST BASKETBALL TEAM IN THE SEC, has lost their last nine.

Of course, Florida, the No. 1 seed, looks to have the easiest route to at least the semifinals. Billy Donovan, 2013 SEC Coach of the Year, has the most well-rounded squad this week. One thing you need to be aware of with the Gators is they're 7-6 away from Gainsville. That could haunt them a tad bit in Nashville.

Ole Miss, the No. 4 seed, would have to be the other favorite. Assuming they could take care of business with Missouri or possibly even Texas A&M, they could face Kentucky Saturday afternoon in only their second game. Marshall Henderson, a Second Team All-SEC member, can keep his team in, or out, at any given time.

Kentucky, No. 2 seed, has been a toss-up since Nerlens Noel, SEC Defensive Player of the Year, got hurt. The quarterfinals game with Vanderbilt or even Arkansas could be game-to-watch Friday.

Alabama, the No. 4 seed, is the dark horse. Just like Kentucky, Tennessee, and Ole Miss, the Tide needs at least one win in the tournament to convince the Selection Committee they deserve to be dancing Sunday. If Trevor Releford, First Team All-SEC selection, gets motivated they could give the Gators a run for their money Saturday.

But what about everyone else? That's the thing; seeds 5-14 are truly gambles. The most exciting games could actually take place Wednesday and Thursday, maybe a few Friday but it's hard to predict without the first six games.

Here's what some of the FWtCT crew thinks about Nashville's 13 games.

Interesting picks, eh? This year's tournament should be really, really fun. Here's a reminder of times (ET), TV, and XM/Sirius of Wednesday's through Friday's games. 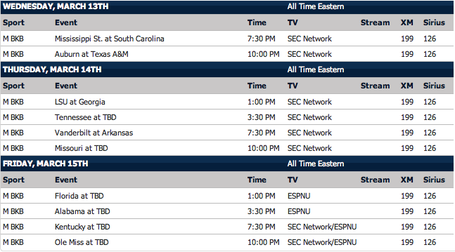