Bulldogs Pound the Devils for 16-0 start

Share All sharing options for: Bulldogs Pound the Devils for 16-0 start

A cold start from the MSU defense wasn't enough to stop the hot bats of the Maroon and White offense as the Bulldogs pounded out 14 runs on 17 hits connecting for three or more runs in three different innings on their way to their 16th-consecutive win to start the 2013 season, with a 14-2 triumph.

MSU was led by a quartet of Dawgs with multi-base hits and big days. Brett Pirtle had his first multi-hit ball game of the season as he recorded a double and home run in his first two at bats after coming into the ball game with three hits the entire season to-date. Hunter Renfroe hit his team-leading third home run on a 2-for-3 day with four RBIs. Alex Detz also remained hot on the season reaching base in all four tries with a 2-for-2 effort on a double, triple and a couple of walks while scoring two runs and driving in another and Adam Frazier stayed consistent at the plate reaching in three of his four at bats with a 2-for-3 night.

The night started off rough for MSU starter Brandon Woodruff as he was only able to record one out on the day before being pulled for senior southpaw Luis Pollorena. Woodruff had given up a lead-off single and hit a batter while getting a ground out to bring in the run.

But Pollorena (3-0) would shut the door retiring the first nine batters he faced with the first four being strikeouts. He would carry the Bulldogs 3.1 innings, giving up just one hit on a run with five strikeouts to earn the win.

Meanwhile, the Bulldog bats were hot. After two batters reached in the first but were left stranded, State would score in the next seven innings putting up at least three runs in three of those innings. A 1-0 score would last just one full inning as MSU would then outscore the Delta Devils 14-1 the rest of the ball game to get the 14-2 win.

Five Bulldog hurlers were on the mound Tuesday with Preston Brown, Trevor Fitts and John Marc Shelly following Pollorena respectively. The three pitchers combined for 5.1 innings with just two hits and no runs striking out six.

The Maroon and White now turn to a pivotal final weekend before SEC play against one of the top hitting teams in the nation, Central Arkansas. Central Arkansas(12-1) came to Starkville last year and stole a win from the Bulldogs and return a solid team as they have outscored their opponents by 90 runs this season and have reeled off nine consecutive wins. 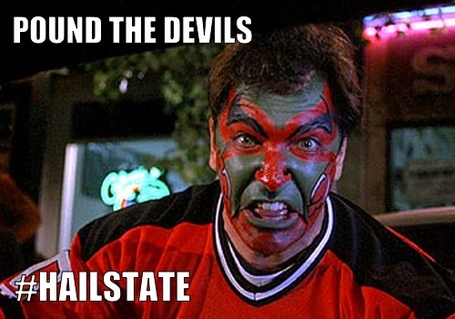 (Puddy isn't happy about this one)