MSU Pro Day 2013: Banks, Bumphis, and others make impressions on the scouts

Johnthan Banks improved several categories following the NFL combine, and several other Bulldogs made the most of the opportunity to impress the numerous scouts on-hand.

Share All sharing options for: MSU Pro Day 2013: Banks, Bumphis, and others make impressions on the scouts

After Johnthan Banks, Darius Slay, and Josh Boyd all got their turns last week to impress scouts at the NFL combine, the Bulldog trio joined a larger group of Bulldogs today in working out for scouts at MSU's pro day on campus. Some 30+ Bulldogs and former Bulldogs worked out in front of dozens of NFL scouts in numerous drills today at the Palmeiro Center on campus.

The event was closed to the media, reportedly at the request of several scouts, but the school did a pretty good job of providing information and updates throughout the day, capped off with this excellent recap of the full day from our friend Bob Carskadon. BUT, the school did keep the event closed to the media for the most part, so I plan to mix in some non-factual results from today's pro day as well in this post.

Banks' 40 time was one of the most closely watched events today, after Johnthan ran a slightly disappointing 4.61 last week at the combine. Banks didn't disappoint today, running a hand-timed unofficial 4.51, shaving a full tenth of a second off his combine time, and boosting his stock back up with the scouts. Banks also, according to Bob's story above, boosted his results in several other drills on the day, capping off quite a successfull day. What's funny is that Banks, who has been known to be big into riding horses, told everyone after he finished that he was going out to Maben to ride horses after he finished. I so wished he would've had one tied up inside the Palmeiro and just have ridden it out and off into the sunset. That's how they end good days in the movies, right?

One draft analyst, Tony Pauline, said Banks may have even crept back up close if not into the first round with his pro day performance:

Unconfirmed pro-day result: Banks was able to improve his 40 time even though he ran in wrangler jeans, a rhinestone belt buckle, and cowboy hat.

Slay, as many know, killed it with his 40 time at the combine, so he chose not to participate in many of the drills. Can't blame him for that, he's pretty much set himself up well for the draft already.

Unconfirmed pro-day result: Slay did actually run the 40, he just ran it so fast that no one could get a time on it.

Bumphis, after not getting an invitation to the combine, was probably the Bulldog who felt he had the most to prove. Indications where that Chad used that snub as motivation, and was able to fine tune himself before yesterday's pro day. From Bob's story above and other places, it seems that Bumphis managed a 4.51 unofficial 40 yesterday, while turning in a solid round on the other drills. I think Bumphis could be one of the serious sleepers out of MSU's 2013 class. And, from what Pauline said, it sounds like scouts took note of that as well.

Unconfirmed pro-day result: Relf-to-Bumphis was reunited, and all was right in our worlds again.

As the above tweet from Tony Pauline alludes to, Josh Boyd was another Bulldog who may have improved his stock with his workout yesterday. I thought I remember seeing somewhere yesterday that Boyd managed to run a sub 5-second 40 yard dash, but can't seem to find that information right now. If that's true, then that's quite an improvement from his combine run, and is impressive for a guy his size. It seems from all indications that Boyd improved on most of the drills he participated in yesterday, so we could see his draft stock rise as well come April.

Unconfirmed pro-day result: Boyd brought the house down with a haunting rendition of "This Girl is On Fire" at lunch during the talent show portion of the pro day.

We don't know much about how Lawrence's pro day went, but we do have this visual evidence of his shirtless 40 yard dash: 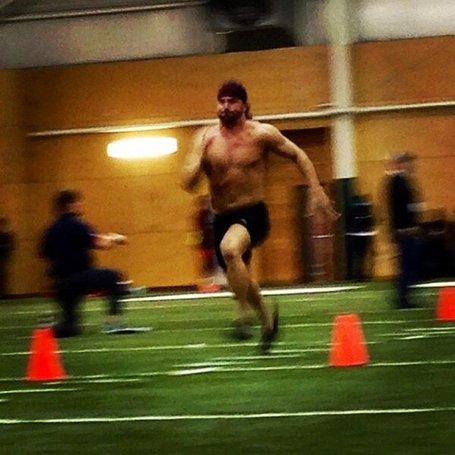 The big fella flew under the radar most of the 2012 season, but Dewayne caught some attention yesterday with his bench press performance. Cherrington was able to pump out 36 (!) reps on the 225 bench press, which is quite impressive. For comparison, the best set at the NFL combine was 38 by SMU's Margus Hunt. Fellow Bulldog Josh Boyd was able to put up 32 himself at the combine, good enough for fourth best overall there.