A FWtCT source* shared an early concept for the commemorative MSU uniforms for the season opener this fall, and it's quite primitive.

There is no doubt that today's reveal for MSU's commemorative uniforms, to be worn for this fall's opener against Southern Miss, went well.  Fans everywhere expressed a great deal of satisfaction with how the uniforms looked, and some even called for them to become the team's new full time unis.

Despite this positive response, it's hard to say whether or not fans would have felt the same way had Adidas gone with one of its original, more out-of-the-box designs.  FWtCT has obtained* through a source an early mock up of a commemorative uniforms concept, which can be seen below.  The source to FWtCT on the early concept:

"Early on, Adidas was really trying to think outside the box.  With the special uniforms set to commemorate 100 years at Scott Field, they thought it would be great to honor one of the early football teams.  Then they took that line of thinking further, as they explored honoring the stadium's original namesake, Don Scott, by creating a sleek, primitive design based on Scott's track uniform when he was on campus in the early 1900s."

When we asked the source what sort of protection these minimalists track-style uniforms would offer players in today's brutal game, he responded:

"I mean they aren't much less material than the new techfit uniforms.  I'm sure they can find room in there for some pads." 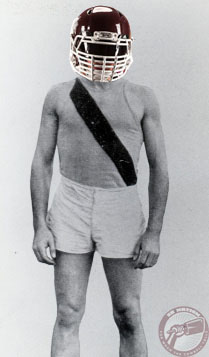