Dak Prescott has 50/1 Odds to Win the Heisman

Share All sharing options for: Dak Prescott has 50/1 Odds to Win the Heisman

Here's an abbreviated version of the list. Included are the top five players and every candidate from the SEC: 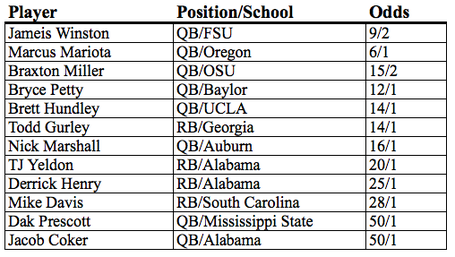 -Of course Jameis Winston has the best odds to win the Heisman. Anybody would have a pretty good chance at the Heisman if they were the quarterback of a team who's toughest game is against Clemson.

-Marcus Mariota will probably have a great year but after Oregon's annual loss to Stanford he'll drop out of the race.

-Let's be honest here, I probably have a better chance to win the Heisman than Braxton Miller.

-Baylor averages like 4,890 yards of offense in every game, so Bryce Petty will have the numbers to win the Heisman. But as a QB in the Big 12 he won't have many chances for the ever-important "signature win."

-If anyone in the Pac 12 is going to win the Heisman this year it won't be Brett Hundley.

-Todd Gurley is a probably the best running back in the nation but this award always goes to a quarterback or the running back from Alabama.

-There are two running backs from Alabama on the list.

-Dak Prescott has a 50/1 chance to win the Heisman. Those aren't great odds, but at least he's getting the recognition he deserves.

-Jacob Coker has completed a grand total of 21 passes in his whole career as a college quarterback. He's on the list solely because he's Alabama's QB. I guess this shouldn't be surprising considering AJ "Game-Manager" McCarron somehow came in second in last year's Heisman race.