Dak Prescott added to his career touchdowns responsible and his rushing touchdown while picking up another 200 yard passing game.

While it was not quite the same performance that fans saw out of Dak Prescott in the first two games of the Bulldogs' season, he still turned in quite the performance against the South Alabama Jaguars, throwing for over 200 yards, rushing for over 125, and picking up passing, rushing, and receiving touchdowns.  Here is where Prescott stands against the record books after three weeks of the 2014 season. 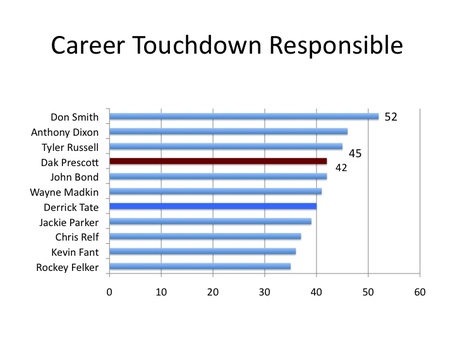 Dak Prescott picked up two more touchdowns for which he holds responsibility—on passing touchdowns, the quarterback gets responsibility, so the on his receiving touchdown, Jameon Lewis picks up the credit—moving him only ten shy of Don Smith's record of 52.  Next up on the list is Tyler Russell with 45, but the next one will break Prescott's tie for fourth with John Bond. 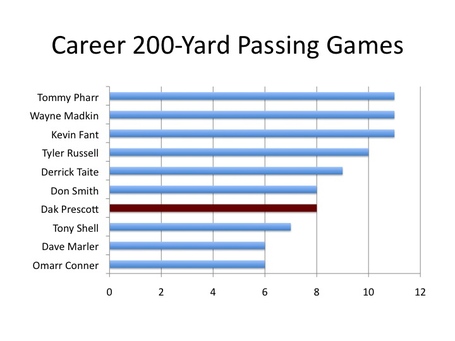 Prescott managed to just eclipse the 200-yard mark against the Jaguars, the eighth time he has done so in a game in his career. As it stands, he can tie Derrick Taite next week. 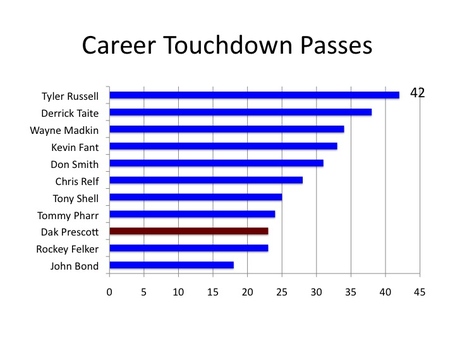 Prescott also moved into a tie with Rockey Felker for ninth all-time at Mississippi State in career touchdown passes with 23 in his career. 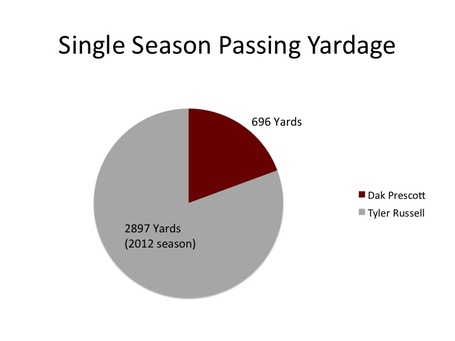 As far as single-season passing yardage, Dak Prescott stands slightly behind Tyler Russell's pace for the single season record.  Prescott is just shy of 400 yards a quarter of the way through the season.  He has to make up about 100 or so yards on his current pace to surpass Tyler Russell (not counting statistics in a potential Prescott bowl game).