Did Dan Mullen Fool Us All?

I believe Dan Mullen pulled the ol' switcheroo by not showing the real MSU in the first three games of the season.

Share All sharing options for: Did Dan Mullen Fool Us All?

Dan Mullen woke up this past Sunday morning and walked completely upright for the first time in a long, long time because the "signature win" monkey that was on his back was finally thrown off.  What unfolded on Saturday night in Baton Rouge was a coaching masterpiece. LSU had no idea how stop MSU's offense or how to hold back the Bulldog's defense. From beginning to end (sans the goofy final two minutes) MSU utterly picked apart a noticeably ill-prepared LSU team. So quick and complete was this beatdown that Tigers fans started filing out of the stadium in the middle of the third quarter (why they would do this when they have a coach like Les Miles is beyond me, but whatever). Simply put, it was unbelievable. I've never seen anything like it in my life and hopefully it won't be the last time that I am so pleasantly surprised by this MSU team.

But why was LSU so dumbfounded by MSU on both sides of the ball? Why could the Bulldogs seemingly do whatever they pleased in every facet of this game despite the hostile atmosphere and a talented Tigers team? Are they just that good at football? Obviously they're awesome, but I think I have an even better answer: Dan Mullen fooled everyone by hiding the potential this team really had in its first three games.

I realize this sounds like a conspiracy theory and, in fact, it is just that. Call me a Mullen truther if you want to but there is hard evidence to back up this conjecture. Please allow me to explain. 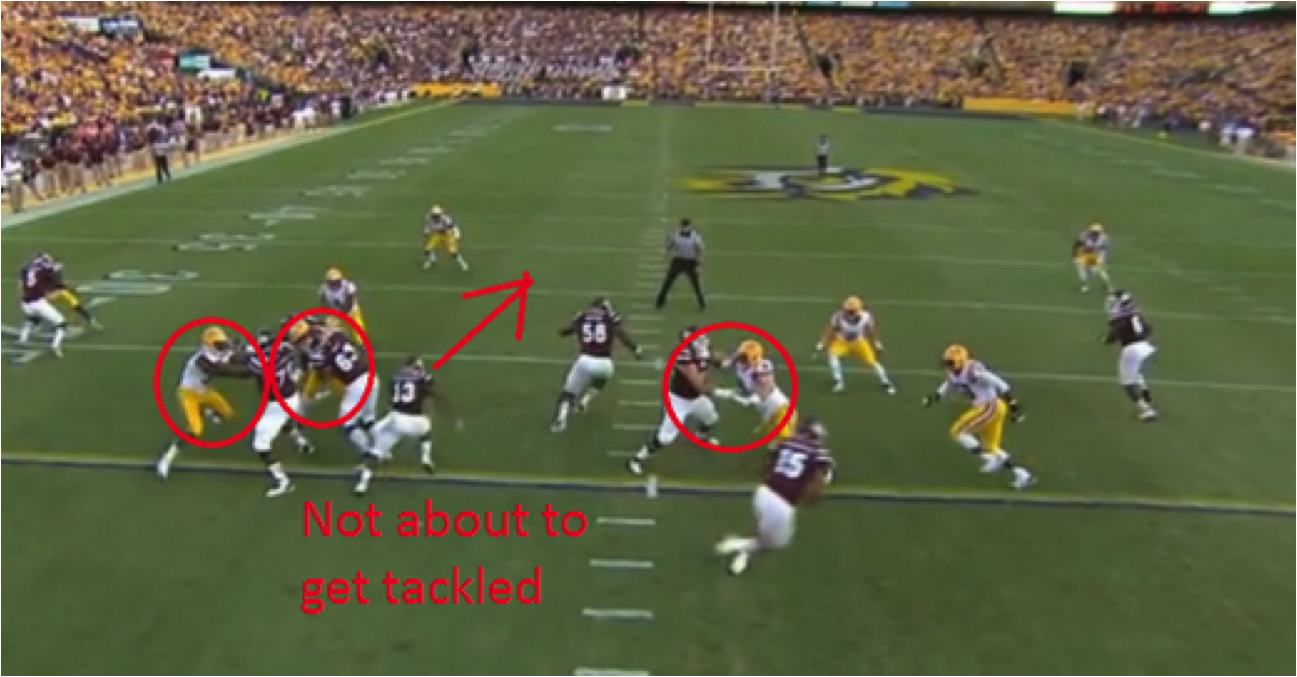 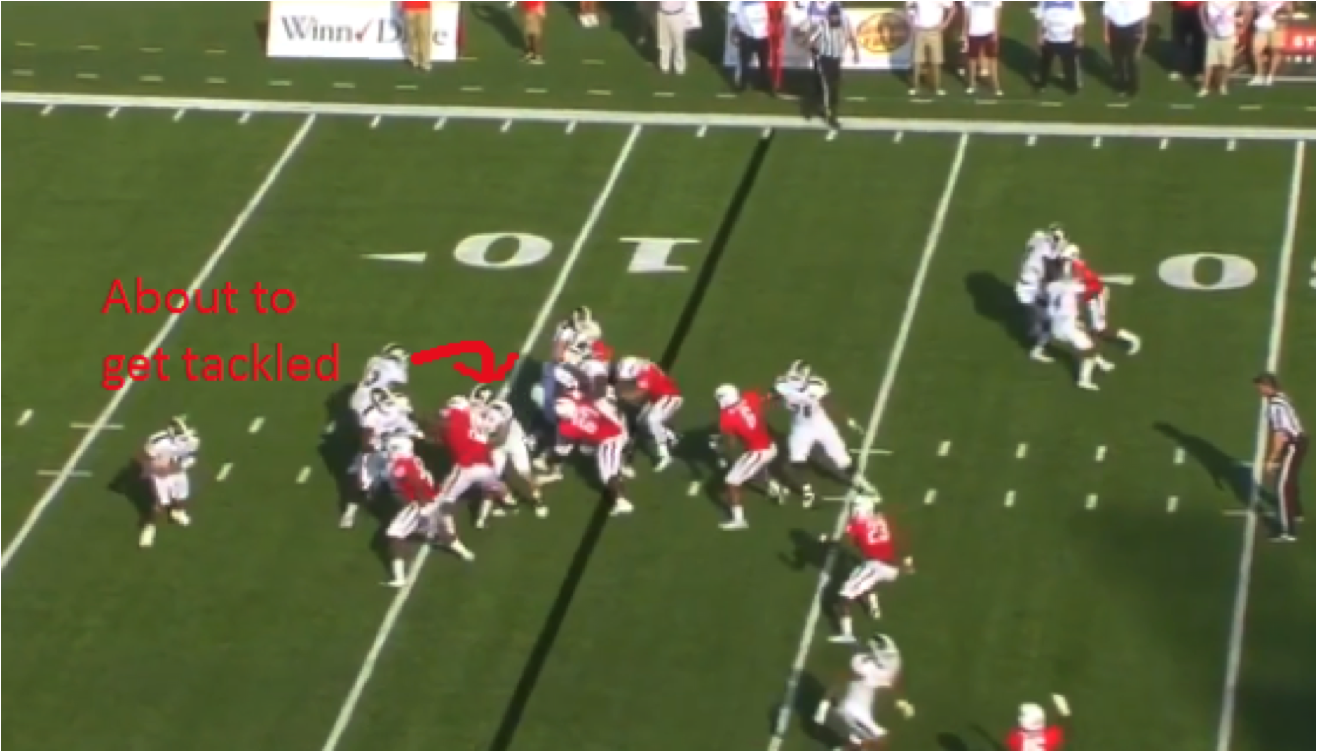 Exhibit A: This is a picture that's been making its way around the MSU community. I first saw it posted by our friend Bob Carskadon on Twitter. It shows Josh Robinson running through an enormous gap in LSU's defense created by MSU's offensive line. It's an impressive picture if you're a fan of the Bulldogs and a depressing show of defensive weakness if you're an LSU fan.

Exhibit B: is a picture from last week's South Alabama game where Josh Robinson is attempting to run up the middle and is going to be tackled immediately because of a lack of run support from his o-line. The very same o-line that just one week later embarrassed LSU's lauded defensive line.

Coincidence? I think not. But this is just the tip of the iceberg.

Here's Josh Robinson's stats from the first three games of the season:

Why were Josh's stats so much better against LSU, a team whose defense was statistically far more impressive than any of State's first three opponents? PROBABLY BECAUSE DAN TOLD HIM TO TAKE IT EASY SO LSU WOULD BE UNPREPARED FOR HOW GOOD JOSH ACTUALLY IS. This logic is flawless and don't try to tell me otherwise.

In the first two games of the season Dan Mullen subbed out Dak Prescott for Damien Williams multiple times for no apparent reason. Damien came in and predictably was nowhere near as good as Dak and often stymied offensive production. Many MSU fans took note of this strategy and complained that Dan Mullen was making stupid coaching decisions. I have a different theory.

I believe this created an illusion of coaching ineptitude that Dan wanted Les Miles to see in order to lull Les into thinking Dan would make poor decisions in-game. Then when State came to Baton Rouge, Dan unleashed a series of phenomenal coaching choices on LSU, including leaving Dak Prescott in for every snap, resulting in a monumental Tiger whipping. So, in this case, joke's on the Joker. Les got Les'd. The Madhatter got mad battered. AMIRIGHT?!

Okay, stupid jokes aside, Dan Mullen coached an incredible game after three seemingly mediocre performances but were they actually mediocre at all or were they totally brilliant? You decide.

Finally, I believe MSU defensive coordinator Geoff Collins was also privy to Dan's master plans and joined in on the con by making State's "Psycho Defense" look totally pedestrian for the first three games of the season. Over and over again against UAB, State's defense got burned by the long ball and against LSU no such long threat could be found. By allowing UAB to throw all over the defense LSU clearly thought they would be able to do as they pleased on offense. When the Tigers found out things wouldn't be so easy it was too late for them to make any real adjustments and their offense was flatter than three-year-old soda.

So, you may be saying to yourself, "Self, this seems pretty unbelievable. I think this guy is full of crap."

First of all, you're a jerk, I'm basically writing this for free so don't judge me so harshly and second, YOU'RE WRONG. Go back and check the facts. My logic is bulletproof and I believe I've laid out everything very clearly. Without a doubt, Dan Mullen is the Kayser Soze of college football coaches. If you don't get that reference, I apologize. In other words, Dan was playing the long con in the first three games and he fooled us all. Maybe this is a better known comparison, Dan Mullen is the Danny Ocean of football coaches.

Watch a movie every now and again, would you? 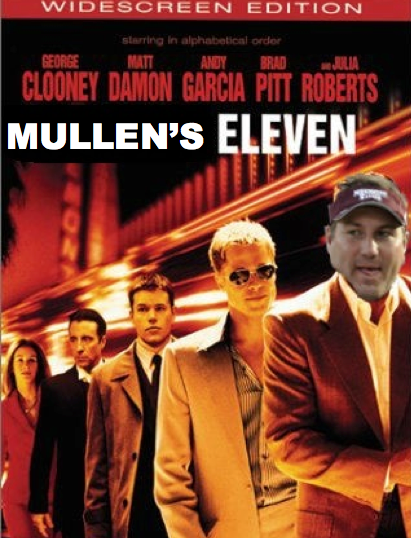 But I digress. In your heart of hearts, I think you know I'm right. I know the NCAA knows what Dan did; this is obviously the real reason why Dillon Day got suspended. Dan Mullen fooled everybody and hopefully he'll pull a fast one on the rest of the SEC too.