Share All sharing options for: Dak's Attack on the MSU Record Book

Throughout the season, as there is more movement by Prescott and others in the record books, the graphics and breakdowns in this article will be increased.

Without further delay, here are four categories in which Prescott has quickly seen himself rise up the ranks. 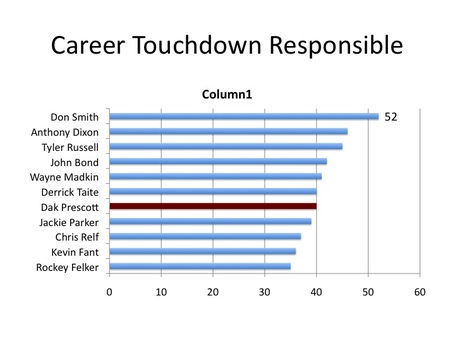 In one that is quite important, Prescott has moved from outside the top-10 into a tie for sixth place with Derrick Taite in the all time touchdowns responsible list.  He could make a serious move this weekend as well, as only five touchdowns separate him from Tyler Russell and third place.  In fact, with Prescott only being 12 touchdowns behind Don Smith, this record should belong to him at the end of the season. 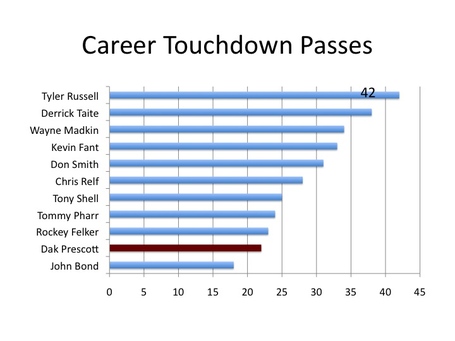 With eight touchdown passes in his first two games, Prescott has gone from outside the top-ten on this list into tenth place with a chance to move up the charts quickly. Another four-passing touchdown game this weekend would move Prescott from 22 touchdowns to 26 and into seventh place behind Chris Relf at 28. 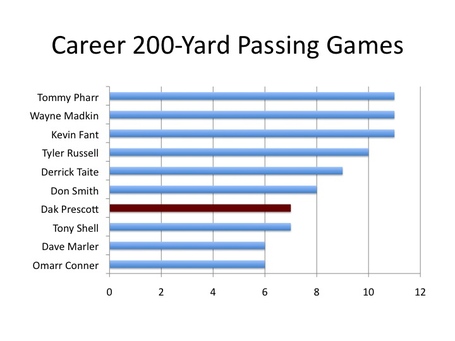 If there was one stat that might show why Mississippi State is the only power-five conference without a quarterback drafted to play quarterback in the modern era, this is it.  Tommy Pharr leads Mississippi State in all time 200-yard passing performances with eleven such games.  There are teams where the quarterback gets more than this in the season.  That said, look for Prescott to push this mark well beyond Pharr by the time he finishes in Starkville.  At this point, every 200-yard passing game will move Prescott up another notch on the list. 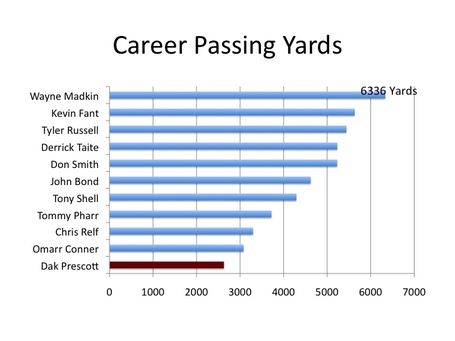 For a player who only had eleven 200-yard passing games, Wayne Madkin managed to put up some decent yardage at Mississippi State, finishing with 6336 passing yards for his career. Prescott, who currently has 2629 passing yards, will have to produce the next two seasons to catch Madkin, but given his hot start to the season, this is a possibility.  With a couple of big games, Prescott should move into this top-ten list, passing Omarr Conner, perhaps as fast as after the LSU game.  If Prescott finishes with a 3000 yard season, he would fall inside the top half of this list.