As National Dairy Month wraps up, a look at a 1969 ad featuring two MSU football players.

Milk: it does a body good.

That's what has been instilled in us by our parents and grandparents since the time we were young children. And in 1969, the Mississippi State football team was apparently part of the effort to promote strong bones and osteoporosis prevention by starring in an ad for milk. 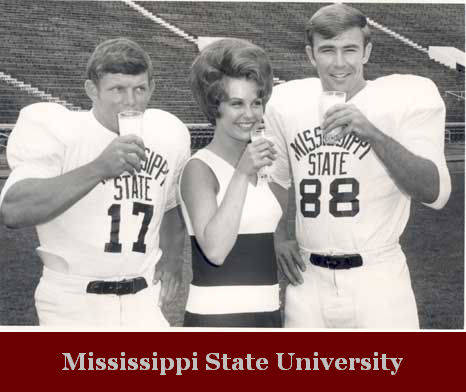 We don't know much of the story behind the photograph, but here is a great shot of two players from the 1969 MSU football team posing with the current Mississippi Miss Hospitality for an ad promoting milk during National Dairy Month.

It's a good thing that Pharr and Milner drank plenty of milk during the 1969 season. That edition of the maroon and white gridiron squad finished 3-7, 0-5 in the SEC.

For fun, here's what I'm guessing all were thinking at the time that this picture was taken: