Headed to Tuscaloosa this weekend? Do yourself a favor and stop at Archibald's Bar-B-Q in Northport.

Share All sharing options for: The Junction Journal: Vol. 1 Issue 8

The place isn't on a main thoroughfare and it sure ain't pretty to look at, but Archibald's Bar-B-Q is worth a visit. I made my first trip in 2008 and have been finding excuses to go back ever since. The building is small, big enough for about 8 people to sit and eat, and so is the menu: Ribs, sliced pork, white bread, and Archibald's sauce. That's pretty much it, and that's all you need. 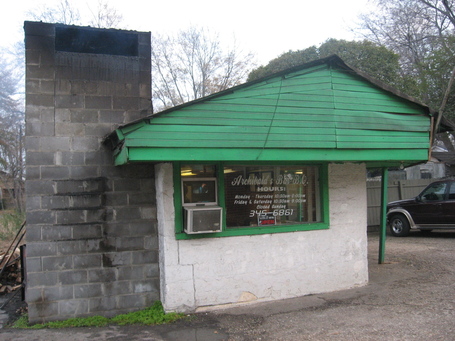 I usually get a combo plate (ribs and sliced pork stuck between white bread slices and doused in sauce), but I'm partial to the sliced pork. It's tough to describe how something is perfectly moist, but you just know it when you taste it. Archibald's sliced pork is just that. Cover it in their secret recipe BBQ sauce and it's pretty much perfect. If you like tangy, vinegar based sauces then you're going LOVE Archibald's sauce. The ribs are good, the sliced pork is great, but the sauce is king in this shack. If you've got any empty plastic jugs sitting around, bring them. You can't leave the place without stocking up on sauce. 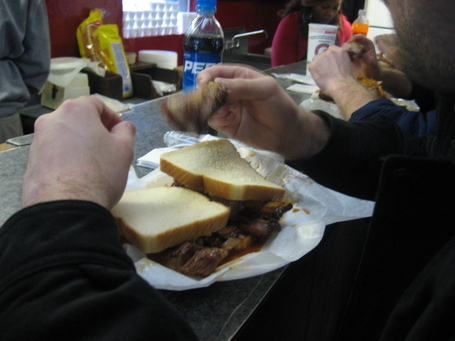 Tailgating advice: If you're driving over T-Town and plan on tailgating before the game, give Archibald's a call beforehand and order a few pounds of sliced pork and a gallon (or two) of sauce. Pick it up on the way to the stadium and enjoy!

Read this great interview with Archibald himself.

“I’ve been the barbecue business all my life.This is just a small little place. I just build a fire and keep the fire low and cook it slow.” – George Archibald, Jr.