Another wild potentially wild weekend of college football has ensued, so let us help you figure out which games are worth your time this weekend.

Another weekend full of games that could shake up the BCS as well as the entire landscape of the 2012 college football season. Basically, another wonderful day in the fall paradise that is college football season. Today features another strong set of games, but specifically four huge contests around the country that could help shape up the BCS a bit better come Sunday afternoon. Let's take a look at what this weekend of college football has in store for us, including College Gameday's trip to Norman, Oklahoma for the big Notre Dame - Oklahoma game this weekend.

I finally woke up and had a decent week last week, going 4-1 in the five games I picked. However, I should be ashamed of myself for picking against Kansas State yet again in a game that was never close. I will not make the same mistake this week I swear, Grandpa Bill. Now let's take a look at the full top 25 / SEC football schedule for today:

Despite my personal disappointment in College Gameday not choosing to go to Tuscaloosa for the MSU - Bama game, I can certainly understand their trip to Norman. With the start Notre Dame has had, this is definitely one of the biggest games of the weekend, and only one team will emerge alive in the national title hunt come Saturday night. As far as the crowd should go in Norman, I really don't know what to expect from Sooner country. Overalls, maybe? The biggest question remains as to who Lee Corso will pick, and how he plans to do it. Two weeks ago Corso brought on a live Gamecock, and last week, well this happened: 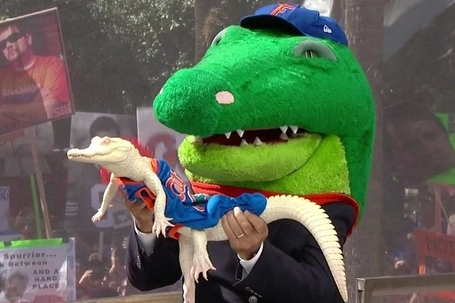 I expect Corso to go with the home standing Sooners, sending Lou Holtz into a fit of rage that only Vince Vaughn doing an Irish jig could calm down.

This one has kind of turned out to be a big matchup, and one that should definitely be closer than many might have thought at the beginning of the season. Ole Miss goes into the natural state with confidence, but Arkansas has gotten things back on track a bit in the last several weeks, putting together two straight wins to get back near .500. This game may be close for awhile, but I think Arkansas still has too much talent, and Tyler Wilson pulls the hogs away in the end.

Florida just keeps on keeping on, and I expect this week to be no different. Georgia, for all of the hype that they received in the preseason, just doesn't still give me that warm fuzzy feeling, especially against this outstanding Gator defense. Florida has done well for me in the games I've picked them in, so I'm staying with Muschamp and the Gators to keep their perfect season alive in this one.

How many weeks can I keep picking against Kansas State and refuse to see how good this team is? They've more than proved that they are one of college football's elite teams this year led by Collin Klein, and they get to go back home this weekend to face an upstart Tommy Tubberville led Red Raider team. This game should be a good one, but expect the Wizard of Manhattan to keep the train on rollin'.

How I'd bet [hypothetically] - Larry David Bill Snyder and his Wildcats are favored by 7.5 points, and I believe that's well within their grasp in this game. Although TT has been good since that blowout to the Sooners, I think that run stops here in (little) Manhattan. Kansas State 35, Texas Tech 14

All eyes will be one of two places Saturday night: here, on Norman, or on Tuscaloosa. In Norman, a solid Notre Dame team travels for its toughest test by far this year against the Sooners of Oklahoma. Several weeks ago I thought this team was a bit dead in the water after that home loss to Kansas State, but they've certainly righted the ship, with the exclamation point being the huge blowout of Texas two weeks ago. This should be a good defensive struggle, but one that I believe will see Oklahoma just have too much offense in the end.

How I'd bet [hypothetically] -Notre Dame is having a great season, but I feel like they have benefited from a good home schedule and matchups with weaker Big Ten teams who at the time seemed better than they are. I still think the Domers are good, but not Top 5 good, and I think America finds that out this weekend. I'm taking Bob Stoops here to cover. Oklahoma 35, Notre Dame 21

Homeric Choices Game of the Week

Seasoned betters would tell you to never ever pick with your heart, but YOU KNOW WHAT SCREW THAT I AIN'T NO SEASONED BETTER. Seriously, there's what I expect to happen in this game, and what I'm hoping for. For this segment, we're going to go with what I'm hoping for. For starters, I'm hoping for State to be able to stifle the Alabama run game, at least enough to keep them in the game. Secondly, I'm hoping that Tyler Russell proves himself on the big stage this weekend, putting together the game of his life that still will probably be good enough just to keep State in it. There's been a lot of feeling from Alabama fans this week that they are being disrespected, but I don't see it that way. I just think State fans are proud of what we've done not only this season but how far we've come since 2008, and we are hopeful for a great result on Saturday. In this scenario, I predict that great output (and that I end up fainting from over cowbelling late Saturday night.