Sorry, Big Blue, but there are no alley-oops in football.

There isn't a single SEC program I loathe more than the University of Kentucky basketball team. Their endless stream of five-star recruits, blue haired fans (figuratively and literally), and John Wall's dance, just get under my skin.

It's unfair and illogical to allow my hate for UK hoops to carry over to the Wildcats' football program, but this the SEC. I'm 100% allowed to imagine that all of Kentucky's football players on Saturday are Erik Daniels and Demarcus Cousins, so that when Nickoe Whitley de-cleats Jalen Whitlow my day will be that much better.

HERE ARE FIVE THINGS YOU NEED TO KNOW ABOUT BIG BLUE:

1. THE HEFTY-LEFTY, Jared Lorenzen, teamed up with Kentucky freshman QB, Patrick Towles in January to do what he does best: Eat. Lorenzen was pretty good at throwing touchdowns at UK too, but it's most important to remember that he is/was big-boned enormous. Here's photo confirmation (hint: he's the fat guy).

2. THE BLUEGRASS MIRACLE. Devry Henderson and the Tigers poked and poked at Lorenzen like he was the Pillsbury Dough Boy and then finally just ripped his heart out and ate it like a cinnamon roll.

3. DEREK EFF-ING ABNEY, David Heard and the rest of the Mississippi State defense are still trying to tackle this guy.

4. "GRINDIN' FOR MY STATE." Anthony Dixon coined the phrase after his record-setting game against Kentucky in 2009. "Boobie" had fun, fun, fun rushing for a school record 252 yards against the 'Cats.

5. DARYL COLLINS, a UK freshman wide out, wants to know how his hair looks... 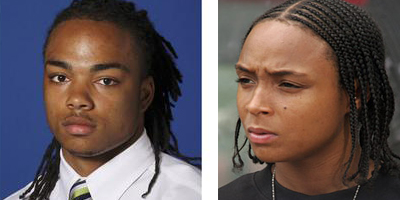