Looking Back at the 2012 Regular Season: Wide Receiver Position

With the regular season in the books, it is time to look back at how the different position performed during the season. This coverage leads off with the wide receiver position where new stars were expected to shine, but the old names didn't fade away.

Share All sharing options for: Looking Back at the 2012 Regular Season: Wide Receiver Position

Mississippi State fans expected a much larger role for the wide receiver position in 2012 because the Bulldogs figured to throw the ball more than ever with Tyler Russell at quarterback.

Those expectations grew during the spring, especially with the emergence of Joe Morrow in the spring practice period, and in fact, many Bulldog fans expected a youth movement of sorts out of the Mississippi State wide receivers. In the end, this is how the receivers sorted out statistically. 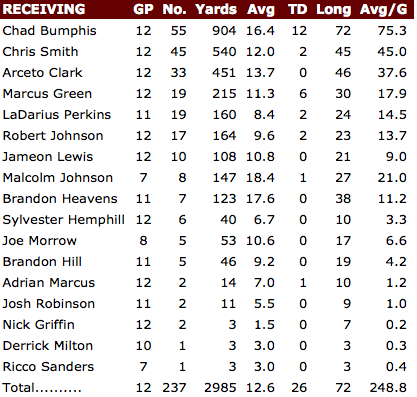 A few things jump out quickly. First of all, some had begun to write of Chad Bumphis as a player that would not quite live up to expectations. He responded in a huge way, hauling in 55 catches for 905 yards and 12 touchdowns. His yardage accounted for 30.2% of the receiving yardage on the team, and his 12 touchdowns made up 46% of all receiving touchdowns. With Bumphis only accounting for 23.2% of all receptions, he proved to have big play ability as a receiver.

What about that expected youth movement? It did not much materialize. Behind Bumphis, seniors Chris Smith and Arceto Clark finished second and third in the receiving game. Smith finished the regular season with 540 yards and two scores, and Clark finished with 451 yards, but he never found pay dirt. Smith did his damage on 45 receptions. All together the three senior wide outs combined for 1895 of the 2985 Mississippi State receiving yards or 63.4%

As for those young guys, namely Jameon Lewis and Joe Morrow? Lewis played in every game, but only caught ten passes for 108 yard. Joe Morrow only saw the field in eight games, catching five passes for 53 yards. Both averaged over ten yards a reception, but that fell below the production of many other receivers. In fact, Sylvester Hemphill finished with more receptions that Morrow.

As far as scoring, Marcus Green proved to be the most productive receiver, catching six touchdowns on 19 receptions, good for a touchdown on 31.5% of all of his catches. He also accounted for 215 yards, surprising many with his sixth year of eligibility.

LaDarius Perkins, a running back, also played a large role in the receiving game, catching two touchdowns, both against Arkansas on 19 receptions.

It will be interesting to watch how these young guys develop during the three weeks of bowl practice. The Bulldogs will find themselves in the interesting spot of trying to keep their top receivers sharp for the bowl game but trying to bring their younger players along. The maturation of these young receivers will determine much of the success of the Bulldogs in 2013.