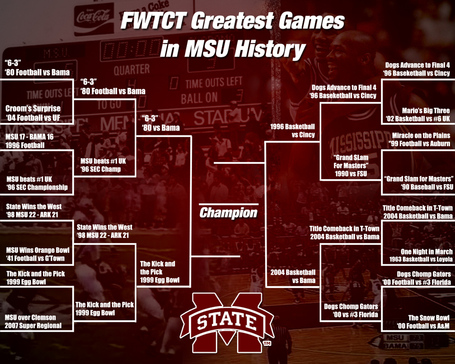 We're down to four. If you missed how we got to this point, click HERE. As for this matchup, it's beating Alabama in 1980 vs. beating Ole Miss in 1999.

State started out 8-0, all the way to #8 in the country but lost the next two road games at #11 Alabama & #22 Arkansas. For the third straight week, it looked like #18 MSU would lose as the Rebs had us down 20-6 after the 3rd quarter...but a great comeback ensued.

Wayne Madkin engineered an 88-yard touchdown drive that tied the game at 20 with only 27 seconds left in regulation. Instead of playing for overtime (since they were on their own 25 yard line), Cutcliffe went to the air, but Remaro Miller's pass was deflected off Robert Bean's hand and foot, then was intercepted by Eugene Clinton who returned it to the Ole Miss 27 yard line. Scott Westerfield then nailed a 44-yard field goal to win it 23-20.

From the start of the 1971 season until this game on November 1, 1980, Bear Bryant's Crimson Tide were 104-11 with 3 national championships (legitimate ones). They had beaten Mississippi State by an average margin of 26.7 over that span. In fact, Bama had won the previous 22 games between the two programs.

This game didn't look to be any different. Alabama had won 28 consecutive games including 27 straight SEC contests. They were the back-to-back defending national champions. They came to Jackson, MS and a 6-2 Mississippi State team held their vaunted wish-bone attack to only 116 yards (they averaged over 300) in route to a 6-3 victory for the maroon and white.