We revisit the mooning incident of 1987. 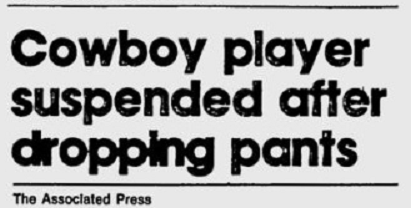 When you think of Dudy Noble Field and its rich history over the years, there is a good chance the first thing to come to your mind is the Left Field Lounge. Long a part of Bulldog games, this group of rag-tag trailers and makeshift bleachers has for years housed some of the most rowdy and steadfastly supportive fans of MSU baseball. This spot just beyond the outfield wall in left (and now right) has even been frequented by John Grisham himself.

Often known for their insistent chattiness with opposing team's outfielders, the 'Lounge Lizards' attempt to rattle traveling team's players. They typically then invite those same young men out to eat at the Lounge after the game, offering them all sorts of tasty food while congratulating them on making it through the game without getting rattled by their cat-calls.

During the 1987 Starkville Regional, however, one young outfielder from Oklahoma State did not take to the name calling and taunting so kindly, and he decided to share with the Left Field Lounge a view of his derriere.

The 1987 Starkville Regional included Mississippi State, Oklahoma State, Texas A&M, North Carolina State, Purdue, and Western Carolina. Mississippi State was fresh off of an SEC Tournament Championship victory, and was selected to play host to a group of six talented teams as the NCAA Mideast Regional that year. But hosting would be the most notable thing MSU would contribute to that particular regional, as the Dogs quickly bowed out, taking an opening victory over NC State before losing back to back games against Texas A&M and Western Carolina.

The championship game of the Starkville Regional came down to Oklahoma State and Texas A&M. I will not speculate as to what was and was not said to the Cowboy's Center Fielder during that championship match-up, but whatever it was, Anthony Blackmon did not care for it at all. At the end of the game, Blackmon pulled down his pants, half-mooning the offenders in the outfield seats. I say half mooning because he supposedly only revealed his sliding shorts to them. Nevertheless, the gesture carried the same connotations to those Anthony felt had wronged him.

Although it happened fast, the gesture was learned of by most if not all those in attendance that day, including the NCAA representative at the game, Gene McArtor (according to this OSU Scout forum). Blackmon was suspended for OSU's first two games of the College World Series for sharing his posterior with the Dudy Noble faithful.

A man you may follow on twitter, @MsStateBaseball, who is highly knowledgeable on all things MSU baseball, recalled this about that fateful event in the 1987 regional:

I was at the moment stationed at my grill behind our "bleachers" in LCF about 30 feet from the OF fence. I had drinking "Gatorade" all day to keep my senses about me when the LF Lounge crowd rose with a cheer, then a jeer, clapping, booing, hollaring. I thought a great catch had been made or a HR had been hit or a naked coed had been rousted up for display. But no, the LF from the opposing team, abused and misused by the Lizards all day, dropped his pants and gave us the other side of the Moon. It was not really a full Harvest Moon because he knew the consequences of what he was doing but a quick show of himself. His glove was laying on the ground too I remember. The OF crowd hoot(ed) and hollered and jeered and threw beverages at him. I am sure his coach was waiting for him too. I heard he got suspended for his behavior.

An interesting side note unrelated to the mooning story was that that Oklahoma State team finished as the national runner up in 1987 to Stanford. That team also featured noted baseball enthusiast and current Chicago White Sox Manager Robin Ventura, who was - at the time of the Starkville Regional - in the midst of setting what still stands as NCAA Division I's longest hitting streak, which stands at 58 consecutive games.

That's it for this week's edition of MSU History 101 students. Until next week, go listen to "Call Me, Maybe"

Screenshot of the above headline from Lakeland Ledger - May 30, 1987.